House of Mouse
Jake and the Never Land Pirates

Dream Along With Mickey

To alert Captain Hook that the Crocodile is near

“That ticking is driving me mad!”
―Captain Hook

The Alarm Clock is an iconic object that Tick-Tock swallowed before he swallowed Captain Hook's hand in the popular Peter Pan franchise.

The alarm clock is a round gold clock that resembles any household alarm clock.

Captain Hook laments Peter Pan's role in causing the Crocodile to follow him, due to Peter cutting off his hand and throwing it to Tick-Tock. Mr. Smee tries to reassure his captain that the ticking of the alarm clock serves as warning for Hook whenever the Crocodile is near. After the climactic battle, Hook tries one last attempt for revenge, but loses his footing as he falls toward the sea, where Tick-Tock is waiting to eat him. Hook manages to escape from the croc's jaws, but as he tries to flee, the Jolly Roger's flag causes the captain to become disoriented and is swallowed by Tick-Tock again. Hook manages to escape the croc's jaws once more (with the alarm clock), and then quickly throws the clock back at Tick-Tock. It is swallowed once again by the croc as he continues his pursuit chasing Captain Hook away from Neverland.

While the alarm clock doesn't appear in the series, it is referenced by a pocket watch in the episode "The Humans Must Be Crazy", where a young Bagheera discovers it. Quickly, the young panther races to the lair to show his friends. Upon arriving there, his friends are torn between themselves and Shere Khan, who believes the "man thing" to be cursed due to the dangers it may possess. Bagheera believes that Khan is merely jealous of his new charm, and that Louie would like to claim it for himself. It wasn't until the charm caused a fire within the lair that Bagheera realized Khan spoke the truth. After the fire is extinguished, Bagheera throws the watch into the river. Tick-Tock then arises from the water, hiccuping with ticking noises as a way to indicate who he is to the audience.

The alarm clock only appeared in the episode "Mickey vs. Shelby" while Mickey is frantically searching through the House of Mouse for Baby Shelby. One of the places Mickey searches is in Tick-Tock's mouth, revealing the clock.

The alarm clock only makes two cameos in the sequel. The first one is at the beginning of the film, where a silhouette of Tick-Tock is seen in the clouds with the clock in his stomach. The final cameo is when Captain Hook and his pirate crew are returning to Neverland through the "Second Star to the Right", alarm clocks are shown briefly. Additionally, after the Octopus acquires a taste for Hook, he develops a habit of popping the suction cups on his tentacles, reminiscent of the ticking of the clock in the Crocodile's belly.

While the clock itself hasn't made any physical appearance in the Disney Junior spin-off, it can still be heard ticking within Tick-Tock's stomach, alerting Hook and everyone else when he is near.

In the Tinker Bell film The Pirate Fairy, the clock's origins are revealed: it was the prized possession of the pirate cook Oppenheimer, a member of James' crew. The clock was a gift from Oppenheimer's mother, and the only thing other than a photo that he had to remember her by. Later, after James reveals his true colors to Zarina, the ticking sound of the clock grows louder under James' cabin. Much to James' annoyance, he bellows down to Oppenheimer that the ticking is driving him mad (alluding the future torment it would play on him). Oppenheimer tries throwing a handkerchief over the clock to stop it from ticking so loudly.

The alarm clock is last seen during the fairies' attack on James' ship. While Oppenheimer was trying to defend himself from Rosetta and the infant crocodile (who would go on to become Tick-Tock), the clock is thrown by the cook, but it is instead swallowed by the croc, causing him to tick as he smiles, apparently enjoying his newfound trait. After James and his crew are thrown overboard into the sea while his ship is stolen by Zarina, Tinker Bell, and the other fairies, James curses the fairies for their efforts. He suddenly hears the ominous ticking sound growing near from the baby crocodile as it swims toward him and begins snapping at him, believing he is a codfish. James swims away in fear while leaving his crew behind, although they are amused by their captain's misfortune.

Dream Along With Mickey

In the show, Tick-Tock's iconic alarm clock was used to make Captain Hook surrender to Peter Pan during a duel. While the clock is being tossed around by the performers, an instrumental version of the song "Never Smile at a Crocodile" is heard. 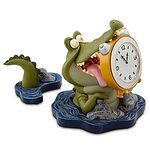