Alaska is the largest state in the United States by area. It is situated in the northwest extremity of the North American continent, with Canada (Yukon Territory) to the east; (British Columbia) touching down to the south, the Arctic Ocean to the north, and the Pacific Ocean to the west and south, with Russia further west across the Bering Strait. Alaska is the 3rd least populous and the least densely populated of the 50 United States. Approximately half of Alaska's 722,718 residents live within the Anchorage metropolitan area. Its Capital is Juneau.

Alaska was purchased from Russia on March 30, 1867, for $7.2 million ($120 million adjusted for inflation) at approximately two cents per acre ($4.74/square kilometers). The land went through several administrative changes before becoming an organized (or incorporated) territory on May 11, 1912, and the 49th state of the U.S. on January 3, 1959.

The name "Alaska" (Аляска) was already introduced in the Russian colonial period, when it was used only for the peninsula and is derived from the Aleut alaxsxaq, meaning "the mainland" or, more literally, "the object towards which the action of the sea is directed." It is also known as Alyeska, the "great land," an Aleut word derived from the same root.

Actors/Actresses and Crew born in Alaska 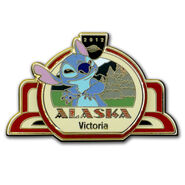 Retrieved from "https://disney.fandom.com/wiki/Alaska?oldid=4463690"
Community content is available under CC-BY-SA unless otherwise noted.