Mystic Manor
Albert the Monkey (or simply just Albert) is one of the main characters of Hong Kong Disneyland's Mystic Manor.

When Lord Henry Mystic built his home at Mystic Point, he rescued a young monkey from the web of a large spider and decided to name him after his favorite uncle. Since then, Albert has become Lord Henry's pet and travelling companion. Albert is mischievous and incredibly curious.

At Disneyland's Bengal Barbecue, a 2017 refurbishment added references to SEA in one of the new dining areas. One of these new props was a doctored photo of Albert (depicted through the use of a plush toy) accompanying the lead characters of the 1951 non-Disney film The African Queen (one of the inspirations for the Jungle Cruise) on a search for the Trapped Safari of the Jungle Cruise attraction.

There is artwork of Albert in this shop.

Several references to Albert and Lord Mystic's adventures are found in this restaurant.

Albert is the protagonist of this attraction. He gets into trouble when he opens an enchanted music box Mystic acquired in 1909. Opening the box while Mystic is in another room, the music box's enchanted music brings everything inside the manor to life. Though he has fun at first amongst the self-playing musical instruments and the solarium of giant Venus flytraps, things begin becoming more sinister as Albert is threatened by the suits of armor in the Arms & Armour room, pinned to a wall by tiki darts in the hall of Tribal Arts, and finally caught in a storm conjured by a statue of the Monkey King in the house's Chinese Salon. He finally closes the music box, stopping the spell and leaving Henry none the wiser. Later at the end of the attraction, Lord Mystic tells Albert to know if he didn't touch the music box and Albert claims it wasn't him to avoid getting in trouble as Mystic bids the guests a farewell.

In the Skipper Canteen restaurant at the Magic Kingdom, Albert's SEA membership fez can be found in a display case. Additionally, a book "written" by Albert can be found on the shelves of the library. A play on the infinite monkey theorem, the spine title is a string of random letters, "FUZNEWI PDMWH CHF JD U". 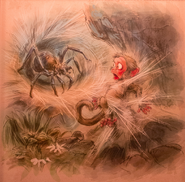 Albert in peril from a Giant Spider 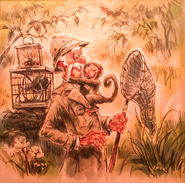 Albert rescued from the Spider by Henry Mystic

In the "Adventures with Lord Henry" shadow puppet show 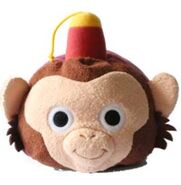