Heatherfield
Alc​hemy[2] is a supporting character in the animated series W.I.T.C.H.

Alchemy is one of the best friends of Elyon and Cornelia. She has reddish-brown messy hair and big melow-blue eyes. She is in the same classes with them, and seems to be the least feminine of them all. Whenever she is upset, she gets cheered by listening to real depressing music. She has a small cat for a pet. In the second season, she gets worried over Elyon's super-long "vacation" and convinces Knickerbocker to start an investigation, causing a lot of trouble for the W.I.T.C.H. girls, who were believed by the authorities to have done something with Elyon. To stop all this, Elyon decides to go back and forth from Meridian to finish the school year. When Elyon leaves Heatherfield once and for all, Alchemy is very upset. She later appears in the Battle of the Bands, being the lead singer in a group called Alchemy and the Grumpers.[3] Alchemy is shown to have a small crush on Caleb when she saw him at Will's surprise birthday party in season one. 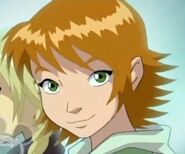