With Basinger:
Ireland Eliesse Baldwin
With Thomas:
Carmen Gabriela Baldwin
Rafael Thomas Baldwin
Leonardo Ángel Charles Baldwin
Romeo Baldwin
son
Alexander Rae "Alec" Baldwin III is an American actor, comedian, writer, producer, and political activist, who is best known for his husky voice. He is best known for his role as Jack Donaghy in 30 Rock, Adam Maitland in Beetlejuice, Lance Cranston/The Shadow in The Shadow, Jack Ryan in The Hunt for Red October, the Narrator of the fifth and sixth seasons of Thomas & Friends, along with portraying Mr. Conductor in the first Thomas movie, Thomas and the Magic Railroad, and Alan Huntley in the fifth and sixth Mission Impossible films: Rogue Nation and Fallout. He also voiced Dennis the Hitman in The SpongeBob SquarePants Movie, Makunga in DreamWorks' Madagascar: Escape 2 Africa, and Donald Trump and the title character in DreamWorks' The Boss Baby.

He is the eldest brother of actors Daniel Baldwin, William Baldwin, and Stephen Baldwin.

For Disney, he posed as the Magic Mirror in "Where Magic Speaks, Even When You Are Not the Fairest of Them All" in the Disney Dream Portrait Series. He also played Jimmy Doolittle in Pearl Harbor and Charlie Pearl in The Marrying Man. 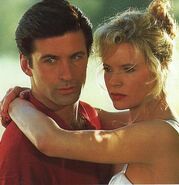 Magic Mirror in "Where Magic Speaks, Even When You Are Not the Fairest of Them All" from the Disney Dream Portrait Series

Alec Baldwin with his brothers: William, Stephen, and Daniel in May 2008.

Alec Baldwin at his Hollywood Walk of Fame ceremony in February 2011.