He was also the creative consultant for the animated series Fish Hooks, where he voiced Clamantha. He also appeared in the Phineas and Ferb episode "Terrifying Tri-State Trilogy of Terror", where he voiced Officer Concord, the Juice Time Juice Box Flavor Cop in the segment "Invasion of the Evil Platypus Clones", and voiced Ben Fotino in the Star vs. the Forces of Evil episode "Booth Buddies" and Wyatt in the Big City Greens episode "Park Pandemonium". He also voiced the Curator (Stan's frog counterpart) in the Amphibia episode "Wax Museum". He also provided additional voices in the video games Disney Infinity 2.0 and Disney Infinity 3.0. He currently voices King and Hooty in The Owl House, for which he is also credited as creative consultant.

Ben Fotino
(Star vs. the Forces of Evil) 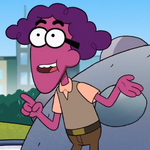