Inaction, Being rejected by Angelica and Eliza

Alexander Hamilton is the dramatized version of the real life historical figure, and is the main character of the hit musical Hamilton. He is best known as one of the founding fathers of The United States of America. He is portrayed by Lin-Manuel Miranda.

Hamilton is first shown to be an educated, ambitious and charismatic young man, but his flaws lie in his impulsiveness, his arrogance, and pride which leads him to trouble on many occasions. Throughout the first act, he learns to mature and gains a sense of humility. He is also incredibly charming gaining a lot of allies.

However throughout the second act he is much older, gaining a sense of wisdom, though his issues of self control and pride are what ultimately lead him to his death. 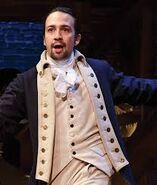