Alexander Ludwig is a Canadian actor, singer, and model. His notable film credits include Will Stanton in The Seeker: The Dark Is Rising and Cato in The Hunger Games. He currently appears in the History Channel series Vikings.

For Disney, he portrayed Seth in the 2009 Disney science-fiction thriller film, Race to Witch Mountain.

Seth
(Race to Witch Mountain)
Add a photo to this gallery

Alexander Ludwig and AnnaSophia Robb at premiere of Race to Witch Mountain in March 2009. 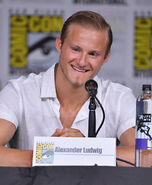 Alexander Ludwig speaks at the 2018 San Diego Comic Con.
Add a photo to this gallery
Retrieved from "https://disney.fandom.com/wiki/Alexander_Ludwig?oldid=3981967"
Community content is available under CC-BY-SA unless otherwise noted.