Alexander Nitrokoff is a character from the Haunted Mansion.

Alexander Nitrokoff is the name of an eastern-European ambassador who at some point in his middle-aged life came to be a guest or resident of the estate which would become the Haunted Mansion (located in New York or New Orleans depending on continuity). He would come to die through mysterious means, last being observed standing atop a lit keg of dynamite while holding a paper of unknown contents and dressed in his undergarments. Following his untimely demise, the ambassador would become one of the 999 spirits haunting the mansion.

Nitrokoff's only appearance in this attraction is as one of four portraits in the stretching room, found alongside those of Sally Slater, Constance Hatchaway and three men in quicksand. While first appearing proud and distinguished, the portrait stretches to reveal him standing in his underwear atop a lit barrel of explosives and about to meet his final fate.

A tarot card made in the likeness of each of the four stretching room paintings in the possession of the fortune-teller Esmeralda, including one of Alexander.

Alexander Nitrokoff appears in the Disney+ special and is played by Crazy Harry.

Alexander is a playable character in the Haunted Mansion levels of this game where he is identified as, "The Orator".

The Ghost Gallery was a backstory for the Haunted Mansion made by Walt Disney World cast-members in the 1990s. While it is not canonical, it has altered many elements of Haunted Mansion cannon to fit in with it.

In this story, the dynamite man was named Ambassador Edward Gracey of Burma and he was a foreign ambassador who was the brother of one George Gracey, Sr. who owned the Haunted Mansion in New York. He was the uncle to George Sr.'s son who would become Master Gracey. While he aided the young master in obtaining many artifacts for the mansion, the two would have a falling out after assisting George Jr. in obtaining an Egyptian mummy. Edward would die in 1937 when revolutionary guerrilla soldiers blew up his embassy during a banquet. In this story he was also the father of Eddy Foster, a servant of the Haunted Mansion who is one of the quicksand men.

In this non-canon comic-books, the dynamite man character was a New Orleans resident named Steven who had impaired sight. He was invited to the mansion by its undead Captain in hopes of adding his soul to their quota. When he lost his glasses, he would stumble into the mansion's gunpowder room and light a keg of explosives, believing it to be a candle.

The Haunted Mansion: Frights of Fancy

Alexander appears in this comic where he is explicitly identified as Alexander Nitrokoff. He is one of several spirits in the manor assembled by Constance Hatchaway to try and make it scarier with the aid of a mortal guest. 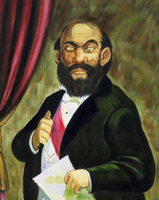 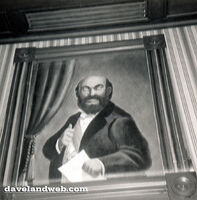 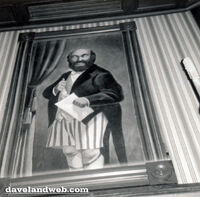