3, including Fernando and Sergio
Alfonso Arau is a Mexican actor, voice actor, producer, director, and writer who voiced Kaa in the Latin American dub of The Jungle Book and Papá Julio in Disney/Pixar's Coco as well as Wonderful World of Disney and Run, Cougar, Run as Etio.

His film credits include Posse, Used Cars (with Gerrit Graham and Michael Talbott), Romancing the Stone, Three Amigos (with Tony Plana and Patrice Martinez), the TV movies Stones for Iberra (with Kamala Lopez), his most recent TV appearance, Where The Hell's That Gold?! (with Willie Nelson, Gregory Sierra, and Annabelle Gurwitch), The Dead One (with Tony Plana), and his most recent movie appearance, 2012's I Heart Shakey.

Arau also directed films like The Trick in the Street, Like Water for Chocolate, A Walk in the Clouds, and Zapata: El sueño de un héroe. 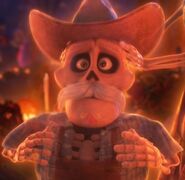 Papá Julio (Coco)
Add a photo to this gallery
Retrieved from "https://disney.fandom.com/wiki/Alfonso_Arau?oldid=4422619"
Community content is available under CC-BY-SA unless otherwise noted.