Mavis and Duncan
Alfre Woodard is an American film, stage, and television actress, producer, and political activist. She is best known for her roles as Rita in Remember My Name, Beatrice "Geechee" in Cross Creek, Jane in Grand Canyon, Doris Robson on the NBC drama series Hill Street Blues, and Dr. Roxanne Turner on the NBC medical drama series St. Elsewhere.

For Disney, she voiced Maisie in The Brave Little Toaster to the Rescue, Polly Henry/Narrator in the short film John Henry, and Plio in the 2000 CGI film, Dinosaur. She also played Miriam Sharpe in Captain America: Civil War, Mrs. Whatsit in A Wrinkle in Time, Mary Thomas in "A Mother's Courage: The Mary Thomas Story", Ann Orkin in The Gun in Betty Lou's Handbag, and Mariah Dillard on the Marvel/Netflix series Luke Cage. Additionally, she voiced Sarabi in the 2019 CGI live-action adaptation of The Lion King.

Maisie
(The Brave Little Toaster to the Rescue)

Mrs. Whatsit
(A Wrinkle in Time)

Sarabi
(The Lion King;
2019 live-action adaptation)
Add a photo to this gallery 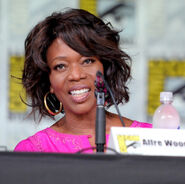 Alfre Woodard with Sarabi for the 2019 live-action adaptation of The Lion King.

Alfre Woodard at premiere of The Lion King remake in July 2019.

Alfre Woodard attending the 2019 Toronto International Film Fest.
Add a photo to this gallery
Retrieved from "https://disney.fandom.com/wiki/Alfre_Woodard?oldid=3861560"
Community content is available under CC-BY-SA unless otherwise noted.