In 2016, the area received some renovation with a noticeably new paint work added to the Queen of Hearts' Castle.

The hedge maze is themed around scenes and characters from the Disney 1951 feature Alice in Wonderland. It comprises two sections: the first one with some of Alice's adventures prior to meeting the Queen of Hearts, and the second based on Alice's encounter with the Queen, who had a similar labyrinth in the film.

The goal of the maze is to reach the Queen of Hearts's Castle, where one can obtain an aerial view of the Fantasyland section of the park. One can exit the maze prior to entering the second area, and the maze's route is similar in shape to the body of the Cheshire Cat, with a semi-floral recreation of the character's face adjacent to the attraction.

The first and easiest part of the Labyrinth focuses on Alice's journey through Wonderland. It starts with guests entering the White Rabbit's Hole, and arriving in a wood featuring strange animals, doors of various sizes (for instance some can only be opened by children), and several signs with conflicting directions. Guests then walk under fountains which spray streams of water over the guest's heads.

Then they discover the Caterpillar's Mushroom Lair, and see the Caterpillar smoking his hookah while it says quotes from the movie. Finally, guests enter the Caucus-Race, led by Dodo, as they circle him with animals (as the movie presents that scene). The first part of the Labyrinth ends up here with a small "Cheshire Cat Walk" Maze and the scene of card soldiers painting the white roses red.

This is the second and tougher part of the Labyrinth. It represents the Queen's Maze as long as Alice's encounter with her. As guests wander through it, the Queen or her card soldiers pop up from time to time, while she screams her famous "Off with their heads!"

The Queen's Castle stands in the center of the maze. Guests reach it in the end, and can therefore go on top of it, where they are given a sight of Fantasyland. A slide used to be featured on the side of the Castle, for children to go down without the stairs, but it was removed due to safety reasons during the park's opening year. 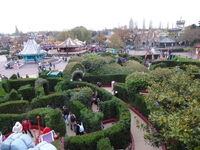 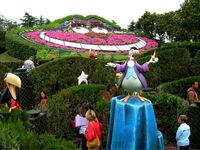 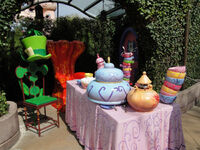 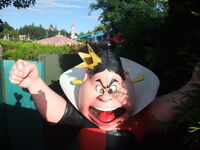 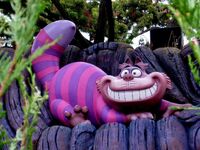 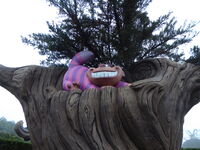 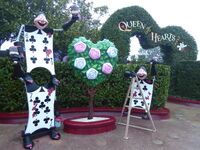 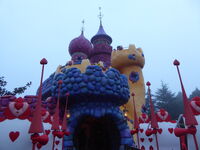