This article is about the 2022 Disney Junior character. For the 1951 animated character, see Alice.

Dinah (cat)
Alice is the protagonist of the Disney Junior animated series Alice's Wonderland Bakery. She is the descendant of her great-grandmother Alice from the 1951 film Alice in Wonderland, who also shares the same name as her, and is a young baker working at the Wonderland Bakery somewhere in Wonderland.[2]

Like the original of 1951, Alice is a young, pretty girl living in what is assumed to be the Victorian era. She has big blue eyes, fair skin, and thick, medium-length, blonde hair held back by a blue checkered ribbon with a bow and a spiral button attached to it. Her dress was designed to be a blue cooking outfit by a chef coat with a small white apron that has a small pocket with a cupcake logo on it. Her sleeves and stockings are purple and pink-striped based on the Cheshire Cat, and wears white and blue-checkered sneakers with pink outlining, blue laces, and two spiral buttons attached to each side of the shoes. She is seven-years-old.

At bedtime, she wears turquoise pajamas with blue and magenta spirals and magenta linings in the tips and pink slippers with ribbons that are the same as her one in her hair.

When out for a beach day she wears a striped swimsuit with dark and light blue stripes, a blue-and-white skirt, and white sandals with magenta straps and ribbons that are the same as the one in her hair. 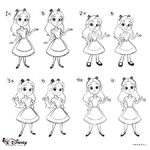 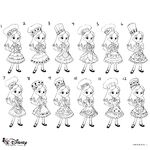 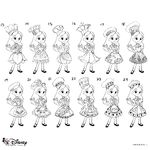 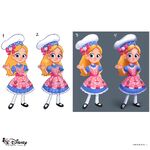 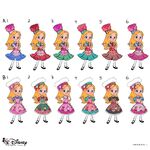 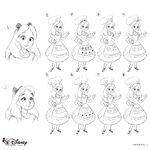