The "Alice Comedies" are a series of animated cartoons created by Walt Disney in the 1920s, in which a live action little girl named Alice and an animated cat named Julius have adventures in an animated landscape. Four actresses played Alice throughout the series starting with Virginia Davis in 1923. The other three actresses were Dawn O'Day, Margie Gay, and Lois Hardwick.

Disney, Ub Iwerks, and their staff made the first Alice Comedy, a one-reel (ten-minute) short subject titled Alice's Wonderland, while still heading the failing Laugh-O-Gram Studio in Kansas City, Missouri. After completing the film, the studio went bankrupt and was forced to shut down. After raising money by working as a freelance photographer, Disney bought a one-way train ticket to Los Angeles, California to live with his uncle Robert and his brother Roy. In California, Disney continued to send out proposals for the Alice series, in hopes of a distribution deal, which was finally arranged through Winkler Pictures, run by Margaret J. Winkler and her fianceé, Charles Mintz.

As for what Alice's Wonderland is about, it starts off with Alice entering a cartoon studio so she can watch cartoons being created. The cartoons come to life and play around, and Alice is amazed by what she sees. After heading to bed that night, Alice dreams that she is in the cartoon world, being welcomed by all the creations. Alice plays around with the cartoons until danger approaches: a group of lions break free from a cage and chase her. This short helped set the stage for what was to come in the later Alice Comedies, as it established the world as a playful dream, and also introduced the elements which would soon define the series.

Although seen as cute and funny in their time, the Alice Comedies contain content which might be considered surprising and somewhat harsh today. Although Alice is a little girl, she spends much of her time avoiding danger, and even getting kidnapped by the cartoon villains, threatened with such perils as being tied to a log in a sawmill. Although all of Alice's threats are cartoon drawings, some might find the imagery a bit disturbing due to the character's young age, and the fact that she is a real person, or they might find it simply light-hearted and fun, due to the portrayal.

One cartoon created in 1925 was called Alice's Egg plant, which was anti-union propaganda towards the IWW. Furthermore, some illegal activities such as bootlegging are portrayed, with Alice herself in ownership of "home brew".

Alice's Wonderland (never theatrically released, but made in 1923)

The copyright for Alice in Slumberland was assigned to Pathe while the rest were assigned to R-C Pictures. None of them were renewed. 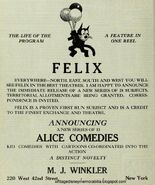 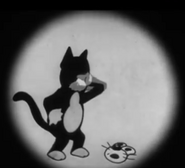 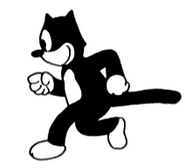 Retrieved from "https://disney.fandom.com/wiki/Alice_Comedies?oldid=3912822"
Community content is available under CC-BY-SA unless otherwise noted.