This article is about the 2010 live action character. For the 1951 animated character, see Alice.

No one believing her

Goes back to the real world and refuses marriage, and continues her father's business (in the first film)

"I've been accused of being Alice and of not being Alice, but this is my dream. I'll decide where it goes from here."

“You'd think she would remember all this from the first time.”
―Uilleam

Alice Kingsleigh is the protagonist of the 2010 film, Alice in Wonderland and its sequel Alice Through the Looking Glass. She is a curious and imaginative young woman who cannot conform to the values of the society in which she lives.

Shortly after finding out she is about to be proposed to, a 19-year-old Alice flees an engagement party. In doing so, she discovers a rabbit named Nivins McTwisp wearing a blue waistcoat. Intrigued, Alice decides to follow it, even as far as stumbling down his rabbit hole. After her fall, Alice lands into Underland, a post-apocalyptic fantasy land, where various animals have apparently been expecting someone called "Alice". While Nivins claims that she is Alice, the other animals are under the impression that she is "The wrong Alice".

She then meets up with Tarrant Hightopp, who is happy to see her, but Alice does not remember him. When the Red Queen's minions come to him looking for her, Tarrant gives Alice a potion that shrinks her, then hides her in a teapot and pretends that he has never seen her, after Stayne leaves. Alice gives Tarrant a piece of her clothes, and Tarrant then makes a strapless dress for her and gives it to her. Tarrant takes Alice on a journey to Marmoreal and explains the Red Queen's reign of terror over Underland on the way. Soon, the Red Queen's minions pick up Alice's scent and start chasing them. With no other options and the enemy approaching, Tarrant puts Alice atop his hat and flings it across a river to the opposite side (saving her from the Red Knights), but then draws attention to himself, and gets captured in the process. He is then taken away as Alice watches on. Alice then hides inside Tarrant's hat and spends the night there. Later, she is found by Bayard, who wants to take her to the White Queen, but Alice insists upon helping the Hatter, so they go to the Red Queen's Castle.

She enters the castle, then she is found by Nivins McTwisp. He gives her a piece of cake to make her grow, but she outgrows the clothes she was wearing. The Red Queen notices an abnormally large girl near one of her hedges and investigates. At this point, Alice discovers that she is naked. Nivins McTwisp, who had been a page to The Red Queen since he was captured by the Knave of Hearts, tries to come up with an excuse for what this girl is. While hesitating, he says "um," which the Red Queen takes this literally. Alice, while posing by the name of Um from Umbridge, explains to the queen that she towers over everyone in Umbridge and that because of that, she is a laughing stock. The Red Queen, who is now under the impression that Um is a beautiful but misunderstood and shy giantess, gives her a warm welcome, stating that "Anybody with a head that large is welcome in my court."

While inside the castle, Alice finds Tarrant, who is still held captive, having to make hats for the Red Queen. Not feeling all right with his work, Tarrant begins kicking some of the hats, but Alice calms him down, telling him the same thing her late father said to her about all of the best people being bonkers, and giving him back his hat. With help from McTwisp, Alice finds the location of a Vorpal sword that is known to be the only one that can kill the Red Queen's Jabberwocky. However, the sword is located inside the pen of the Bandersnatch, who had earlier scratched Alice's arm. Knowing what to do, she comes to Mally and takes one of the Bandersnatch's eyes which had earlier been taken out by Mally, before carefully getting into the Bandersnatch's pen. As the Bandersnatch wakes up, Alice immediately gives it back its eye, but as she tries to open the chest containing the Vorpal sword, the Bandersnatch attempts to attack. At that moment, Alice shows her scratched arm, which makes the Bandersnatch starting to regret what it had done.

After waiting until the next morning, Alice gets the key for the chest, getting out the Vorpal Sword. She comes back to the room where Tarrant is, using the Vorpal sword to break his chains. However, at that moment, Stayne arrives and sees them, getting into a fight with Tarrant. As Mally shouts out to Alice to run, she accidentally lets out Alice's actual name, enabling Stayne and the Red Knights to chase her and surround her around the pen. Just then, the Bandersnatch arrives and helps to take out the Red Knights, before taking Alice to the White Queen's Castle, also taking along Bayard. Upon arrival, the White Queen is glad to have the armor complete with the Vorpal sword, and makes a potion to make Alice small enough to fit in the armor, then takes her to see Absolem, who admits that she is almost the right Alice that the others were commenting about. Meanwhile, with the help of Chessur, Tarrant manages to prevent getting executed, fleeing along with his friends to get to the White Queen's Castle.

On Frabjous Day, the day the Jabberwocky is to be slayed, everyone prepares for battle against the Red Queen and her Red Knights. Still feeling that she is in a dream and cannot do it, Alice goes to Absolem, who is about to enter his pupa stage. Absolem states that he cannot help her unless he knows who she really is, which makes Alice state her full name and life. Absolem then realizes that she is the same Alice who came to Underland thirteen years earlier, having called it "Wonderland". This also makes Alice realize that Underland and everything in it is real, and she feels ready to join the battle. As she begins to fight the Jabberwocky, she practices thinking of six impossible things her father had taught about, and the others begin to battle the Red Queen, the Red Knights and the Jub Jub Bird. Jumping from a spiral staircase on some ruins, Alice slices the Jabberwocky's head off, which makes the Red Knights able to turn against the Red Queen, who along with Stayne gets exiled by the White Queen. Inside the dead Jabberwocky is a type of blood that will allow Alice to travel back to the real world. Knowing that she has to set things right over there, she drinks the vial of blood, but promises to come back soon. Arriving back at the engagement party, Alice admits that Hamish Ascot is not the right man for her to marry, but agrees to be his father's apprentice and do Charles' business of expanding his trade route. As she sets off on the boat sailing to China, she encounters a blue butterfly whom she recognizes to be Absolem.

After arriving back in London from Asia, Alice notices that she has to handle problems with her family. Additionally, by going through a different way back to Underland, she learns from Absolem that problems have also occurred there. 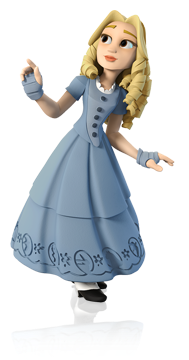 Alice is playable in the Toy Box of the third Disney INFINITY game, released on May 24, 2016.[2] To use her, the player must have their console connected to the internet to install an update patch that contains the data for the character. When she is placed on the Disney INFINITY base, the player unlocks her costume, INterior poster, and the Through the Looking Glass sky and terrain.

In her skill tree, she is one of the characters who can make a Super Jump. After making a regular jump or a Super Jump, she can glide back to the ground by using her dress as a parachute. Compared to the other characters in the game, she has two special moves. "Eat Me Attack" allows Alice to grow larger so to help her defeat her enemies, but she moves slower and can only do a limited number of attacks. "Drink Me Attack" makes Alice shrink so that she appears invisible to enemies. While she can move faster, she can only do simple attacks. Her melee skills include summoning Tweedle Dee and Tweedle Dum, and using a flamingo in her Melee Combo attack. If the player does a Melee Combo attack successfully, Chessur can be summoned to distract enemies.

The Disney Wiki has a collection of images and media related to Alice Kingsleigh.

Retrieved from "https://disney.fandom.com/wiki/Alice_Kingsleigh?oldid=4151861"
Community content is available under CC-BY-SA unless otherwise noted.