Alice from Alice in Wonderland(1951)
Susan Pevensie from The Chronicles of Narnia
Elizabeth Swann from Pirates of the Caribbean
Hermione Granger of the Harry Potter series
Eowyn from Lord of the Rings
Lyra Belacqua from The Golden Compass
Mikaela Barnes from Transformers
Letty from the Fast and Furious series
Hit Girl from Kick Ass.

To discover her destiny and to continue her father's legacy. To save Underland

The Red Queen, The Jabberwocky, The Knave of Hearts.

The Chataway twins bullying her, no one believing her.

Goes back to the real world and refuses marriage and continues her father's business and goes to China.

"This is my dream, I'll decide where it goes from here!"
Alice Kingsleigh is the main protagonist in Disney's and Tim Burton's 2010 film Alice in Wonderland.

Shortly after finding out she is about to be proposed to, a 19 year old Alice flees an engagement party. In doing so she discovers a rabbit named Nivins McTwisp wearing a blue waistcoat. Intrigued, Alice decides to follow it, even as far as stumbling down his rabbit hole. After her fall Alice lands into Underland, a post-apocalyptic fantasy land, where various animals have apparently been expecting someone called "Alice". While Nivins claims that she is Alice, the other animals are under the impression that she is "The wrong Alice".

She then meets up with Tarrant Hightopp, he is happy to see her, but Alice doesn't remember him, when the Red Queen's minions come to him looking for her. He gives Alice a potion that shrinks her, then hides her in a teapot and pretends that he's never seen her, after Stayne leaves. Alice gives Tarrant a piece of her clothes, Tarrant then makes a strapless dress for her and gives it to her. Tarrant takes Alice on a journey to Marmoreal and explains the Red Queen's reign of terror over Underland on the way. Soon, the Red Queen's minions pick up Alice's scent and start chasing them. With no other options, and the enemy approaching, Tarrant puts Alice atop his hat and flings it across a river to the opposite side (saving her from the Red Knights), but then draws attention to himself and gets captured in the process. He is taken away as Alice watches on. Alice then hides inside Tarrant's hat and spends the night there, later Bayard finds her, who wants to take her to the White Queen, but Alice insists upon helping the Hatter, so they go to The Red Queen's Castle.

She enters the castle then she is found by Nivins McTwisp he gives her a piece of cake when she eats a piece of cake, she out grows the clothes she was wearing. The Red Queen notices an abnormally large girl near one of her hedges and investigates. at this point Alice descovers that she´s naked, Nivins McTwisp, who had been a page to The Red Queen since he was captured by the Knave of Hearts, tries to come up with an excuse of what this girl is, while hesitating, he says um. The Red Queen takes this literally. Alice, while posing by the name of Um from Umbridge explains to the queen that she towers over everyone in Umbridge and that because of that she's a laughing stock. The Red Queen, who is now under the impression that Um is a beautiful but misunderstood and shy giantess, gives her a warm welome stating that "Anybody with a head that large is welcome in my court". 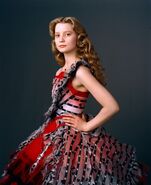 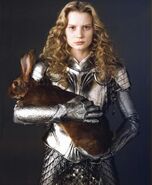 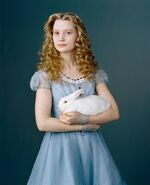 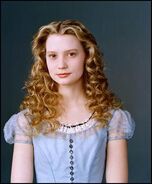 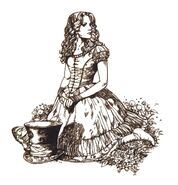 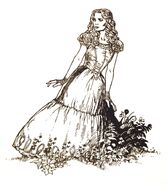 From the Nintendo DS game.
Add a photo to this gallery

Retrieved from "https://disney.fandom.com/wiki/Alice_Kingsleigh?oldid=1176768"
Community content is available under CC-BY-SA unless otherwise noted.