Disney Wiki
Register
Don't have an account?
Sign In
Advertisement
in: Unused concepts, Alice in Wonderland, Animated films,
and 2 more

Twelve years prior to the 1951 film, Alice in Wonderland has been planned out since the 1930s, as the first-ever animated feature by Disney.

However, despite Walt Disney's enthusiasm, the film was postponed and canceled due to restricted budgets that had imposed the studio during World War II, plus the film was not released until the year 1951.

The 1939 draft had beautiful artwork and storyboards done by the talented British concept and visual development artist David Hall, a script by Al Perkins, and songs by Frank Churchill. The Leica reel composed for the film even had a voice cast, such as Cliff Edwards (who played Jiminy Cricket from Pinocchio) portraying the Anthropomorphic "Drink Me" Bottle.

Walt Disney ultimately turned the draft down, as the Wonderland's denizens looked far too monstrous for his tastes, and were hard to animate, as they resembled the Tenniel illustrations too closely.

Ultimately, Walt Disney Productions instead went for a lighter, more modern approach with the final film. However, bits and pieces of this early version have emerged from time to time.

The film opens with Alice on a riverbank like in the final version. She eventually sees the White Rabbit and follows him down a hole, leading to a massive void of gems, stars, and ferocious bats. She then meets the Anthropomorphic "Drink Me" Bottle (voiced by Cliff Edwards), who offers to give Alice a drink of his magic, growing her and then shrinking her. When she shrinks, she is washed into Wonderland by her own tears. She is rescued by the Mouse, and then whisked off to the island of the Gryphon and the Mock Turtle and participates in The Lobster Quadrille. After the dance ends, the Cheshire Cat arrives on the scene and scares everyone away but befriends Alice in her hunt for the White Rabbit.

Wandering through Wonderland, Alice encounters the Caterpillar who tells her about the mushroom which will make her grow. After taking a piece, Alice's neck grows incredibly long, shooting her head up into some trees where a family of birds reside. The birds mistake Alice for a serpent and subsequently attack her. However, she takes another piece from the other side of the mushroom and shrinks herself again. Presently, Alice meets Puppy who begins to chase her. Fortunately, the Cheshire Cat shows up and scares it off. He then tells Alice about the Mad Hatter and the March Hare.

At the Hatter's place, he and the Hare are trying to repair the White Rabbit's watch by smearing the inner-mechanisms with butter. Alice tells them that the watch isn't broken, so the Mad Hatter concludes that "it must be broken before it can be fixed" and flings it over the garden wall. The White Rabbit then shows up and scolds the two for breaking his watch, at which point they declare that he "can't go to the Queen's party without any jam on" and proceed to smear it all over him. Then, the Hatter and the Hare declare that Alice is in no state to attend the party as well because "her legs and hair are too long" and advance toward her with scissors and a knife, prompting Alice to run.

Next, Alice arrives at the White Rabbit's House where she meets the Monkey who shows no interest in starting a conversation with her. Soon, the White Rabbit arrives on a high-wheeled bicycle and crashes into the Monkey, breaking his glasses. Mistaking Alice for his housekeeper, Mary Ann, the White Rabbit sends her inside to fetch another pair. In the bedroom, she finds several different pairs of glasses, all of which magnify whatever part of her body is reflected in the lenses.

After Alice has eaten the cake which makes her grow enormous, the real Mary Ann shows up and terrified at the sight of the giant girl, rushes outside and bangs on a pot with a spoon, alerting the Wonderland Fire Department, who show up with Bill the Lizard in tow. Inside, Alice begins to cry but is surprised to see the Bottle appear from between some books. He offers her another drink to shrink her, which she accepts, then leaves.

A little later, Alice sees the house of the Duchess and decides to investigate it. In the kitchen, the Duchess is nursing a baby while singing. The Cook starts tossing every pan and dish at her disposal, so Alice grabs the baby and runs outside with it, only for it to change into a pig.

In the final scene, Alice comes to The Queen of Hearts' Castle where the Knave of Hearts is accused of stealing the Queen's tarts and put on trial. Alice tries to testify for the Knave, only for the King of Hearts to order for him to be shot with a cannon. After the Knave is taken care of, the Queen orders Alice] to be killed, so she is tied to a bench underneath a large stone gear that will come down and crush her. Luckily, Alice wakes up and finds herself back by the river.

The Anthropomorphic "Drink Me" Bottle

Alice with the White Rabbit and the Monkey 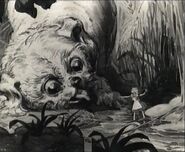 The King and Queen of Hearts

Alice being led to the guillotine

Alice and the Caterpillar

Alice with the Card Painters

[Alice in the Duchess' kitchen

The Duchess with her baby