There is a story mode, a painting mode, and midway-style games. Story mode comes in interactive mode (with passwords) or as a short movie that can be watched in less than an hour. Although the game is directed towards children, literacy in both Japanese and English is required in order to properly enjoy the story mode and to fully understand the rules. The three arcade games present in the game include painting the roses red, whacking characters from the story, matching creatures like in the card game Concentration. The painting mode can be likened to an extremely simplified version of Mario Paint.

There is only one eraser tool and paintings cannot be saved into memory or printed on a printer. Only 16 colors can be used on canvases that feature the film's characters; the full 256-color spectrum is reserved for the blank canvas. While the blank canvas allows for total creativity for older children, the "character canvases" are good for teaching hand-to-eye coordination with very young children. During the interactive adventure, the Queen of Hearts divides a magic globe into three different colored miniature globes. As a result, all the color in Wonderland turns into monochrome and Alice must find the globes in order to restore color to Wonderland.

The Super NES Mouse is also supported as a method to play the game. 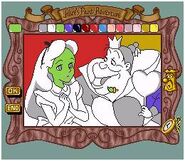 The sample player is trying to draw the scene where Alice meets the Queen of Hearts.