Alien is a sci-fi/horror film franchise produced by 20th Century Studios. It follows the adventures of Ellen Ripley and her battles with a hostile extraterrestrial lifeform known as the Xenomorph, the titular creature of the franchise. In March 20, 2019, the Walt Disney Company acquired 20th Century Fox, thereby granting Disney ownership rights to the Alien intellectual property.

On April 3, 2019, Fox's Emma Watts announced on CinemaCon that Disney has plans to continue the Alien franchise along with Kingsman and Planet of the Apes.

On December 10, 2020, as part of Disney's Investor Day presentation, a new TV series based on the franchise was announced to be in development for FX on Hulu, with Noah Hawley and Ridley Scott being involved. It will be set on Earth in the near future, thus marking the first of the franchise to do so.

Alien is one of the movie franchises represented in The Great Movie Ride at Disney's Hollywood Studios. The guests enter the Nostromo during Ellen Ripley's confrontation with the Xenomorph, at which point the Xenomorph threatens the guests and their guide.

In addition, there had been plans to include another theme park attraction based on the Alien franchise, this would eventually evolve into the (now defunct) Tomorrowland attraction ExtraTERRORestrial Alien Encounter in the Magic Kingdom. The attraction was originally developed under the name of Nostromo, but eventually became its own independent property. Several analogues and counterparts between the attraction and films existed however such as: the Weyland-Yutani corporation with X-S Tech, the evil android Ash and S.I.R., executive Carter J. Burke with chairman L.C. Clench, and of-course, the ride's titular alien with the films' titular xenomorph. 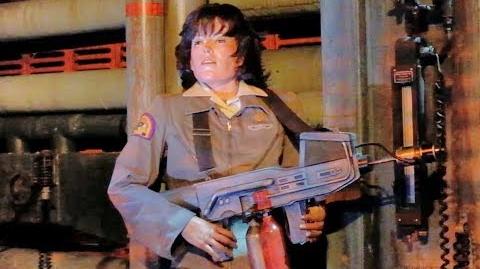 The Great Movie Ride at Disney's Hollywood Studios - The "Alien" sequence
Add a photo to this gallery
Retrieved from "https://disney.fandom.com/wiki/Alien?oldid=4346300"
Community content is available under CC-BY-SA unless otherwise noted.