Alioramus is a tyrannosaurid theropod dinosaur from the Late Cretaceous of Asia. It was a swift, more slender relative of the bigger Tyrannosaurus Rex and had a long skull. It was a carnivore that preyed upon herbivore dinosaurs and other smaller creatures than itself. There are two species in the genus, Alioramus remotus and Alioramus altai.

Alioramus makes its one and only debut in the ride based off the eponymous movie at Animal Kingdom. It is the second dinosaur of the journey and is found after the Styracosaurus and before the Parasaurolophus. It can be seen eating a Brachychampsa when identified. Like the other dinosaurs, Alioramus most likely became extinct from the meteor shower. In real life, Alioramus only lived in Mongolia, Asia, and was long gone by the time the Cretaceous-Tertiary extinction event took place. 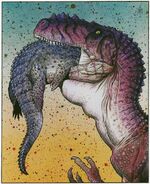 Add a photo to this gallery
Retrieved from "https://disney.fandom.com/wiki/Alioramus?oldid=4237520"
Community content is available under CC-BY-SA unless otherwise noted.