Disney Wiki
Register
Don't have an account?
Sign In
Advertisement
in: Article of the week, Characters, Big Hero 6 characters,
and 13 more
English

Disaster, missed opportunities, Di Amara, not being remembered, being in danger

Unnamed Parents
Alistair Krei is a supporting character in Disney's 2014 animated feature film Big Hero 6. He is a pioneer entrepreneur, tech guru and the CEO of Krei Tech.

San Fransokyo Institute of Technology's most illustrious alum and owner of the biggest technology company in the world, Krei Tech, is always on the hunt for the next big thing. Krei attends the showcase at San Fransokyo Tech and is overwhelmingly impressed by Hiro's ingenuity.[1]

Alistair Krei is a somewhat morally complex man. As a businessman, he's always on the hunt for something new and uses his wealth and intelligence to create amazing inventions that would earn him money. He even had connections with the government and would often sell some of his bigger inventions to them. However, as Robert Callaghan stated during his introduction, Krei's business practices are somewhat questionable; he has been known to cut corners and ignore sound science in order to achieve his goals. This was demonstrated when he was warned that the transportation portal was malfunctioning but proceeded to test it with Abigail as the test subject, only to have the machine fail.

It can be assumed that as a businessman, what mattered most to him was making money by being profitable and taking risks with his inventions (some of which were unstable) without understanding the consequences of his actions. He seems to be the kind of person that is not usually rejected and not very receptive to it, as shown when Hiro rejected Krei's offer to buy his Microbots, he was clearly disappointed, somewhat bitterly saying that he thought Hiro was smarter than that before coldly handing back the Microbot he took. He also seemed to think that money was the answer to everything, as he continued to bombard Hiro with buying his invention, saying he would give him more money than any fourteen-year-old could imagine.

However, despite all of this, he did not seem necessarily evil as he did not seem to mean any actual harm towards Abigail and never committed any actual felons towards anyone―he just simply never considered the consequences of his actions. In addition, it could also be how he was raised. Despite being from a rich family, his parents were strict with him and didn't allow him to show any kind of "weakness". Though he did state during his toast to his company that there were a few setbacks, it is unknown whether or not he was actually referring to Abigail at all or possibly other people harmed by his inventions. He seemed cowardly as he openly feared Yokai and stated that he would be willing to do anything for him, but Yokai wanted his revenge. He is also shown to take pride in his company, having built it from scratch through hard work over the years.

In the series, when Hiro became Krei's intern, a different more soft part of Krei seemed to show as he would sometimes treat Hiro with more kindness than he did to most people often ruffling Hiro's hair (to Hiro's usual delight) and one time giving him a soft smile.

Krei first appears at the San Fransokyo Institute of Technology convention, where he was conversing with a young inventor about his invention before noticing Hiro's Microbots. He quickly takes interest and attempts to have Hiro sell him the Microbots, but Robert intervenes, claiming that Krei only uses science for selfish reasons, ignores sound science, and his actions are sometimes questionable. With this in mind, Hiro politely turns down Krei's offer. Krei then leaves, angry and disappointed saying he thought Hiro was smarter than that. Shortly afterward, the showcase hall catches fire, resulting in the deaths of Hiro's brother Tadashi and apparently Robert.

Later, while Hiro is tracking down Yokai in the abandoned warehouse and after surviving a car chase from the masked man, he shows his friends a symbol of a bird in a circle which he noticed plastered on a map on the wall of an abandoned warehouse where Yokai had been multiplying the microbots and on a piece of wreckage Yokai had been carrying while chasing them. Hiro shows this symbol to the team after they retreat from Yokai to Fred's mansion. Fred, using his knowledge of villains from reading comic books, makes a theory that Krei is really Yokai reminding Hiro how, "Krei wanted your microbots and you said no. Rules don't apply to a man like Krei." Everyone dismisses this idea as it would bring Krei negative attention and be too risky for his public image, "The guy's too high profile."

Hiro and the team head off to an island off the coast where Baymax tracks Yokai's location (having scanned Yokai's body) which turns out to be an abandoned Krei lab. As the team explores the lab, they discover an old computer with the same bird symbol Hiro had seen earlier. It then demonstrates a video of Krei performing a demonstration of a portal that can be used to teleport. He first uses the general's hat as an example, which was a success and next tried the same thing on a human being, who in this case was Abigail Callaghan. One of Krei's scientists revealed that a "slight irregularity" had appeared in the portal's containment field, but he dismissed this and had the scientists proceed. Unfortunately, the experiment failed as the portal began to malfunction and suck everything in with it. Krei was then forced to shut his experiment down and abandon the lab under quarantine. This incident would also later earn him the wrath of Robert, as it was presumed that his daughter Abigail, who was the test subject, had died and he blamed Krei as the latter had proceeded with the experiment despite knowing that there were malfunctions, thus indirectly "killing" her. This made Hiro and the team believe Krei became Yokai in an attempt to steal back his research.

However, when they unmask Yokai, they are shocked to see that he is actually Robert Callaghan, who had used Hiro's microbots to survive the fire and left Tadashi (who had entered the building to save him) to die. After he escapes and Baymax calms down Hiro, who had burst into anger and tears after learning that Robert did not have remorse for causing Tadashi's demise, the team watches the rest of the uncovered video recordings they managed to get on a flash drive to get some answers, realizing that the test subject was Abigail, who was Robert Callaghan's daughter and that, "Callaghan blames Krei." "This is a revenge story."

Robert attacks Krei during his latest ceremony as he reveals his plans to take away everything precious from Krei after he caused the accident that took away his daughter, "Then it's your turn." Krei begs for mercy, saying it was an accident and that he will give Robert anything he wants. However, this only angers Robert as he states that he wants his daughter back. The Big Hero 6 intercepts Robert and attempts to reason with him, acknowledging his loss and asking him, "Is this what Abigail would've wanted?" Robert expresses regret for a moment, but Krei's cowardice causes Robert to resume his plans and pins Krei to a wall while he battles the Big Hero 6. Krei is soon freed from the wall, but the portal remains active. Hiro tells Krei, "We have to shut it down." Krei explains they can't, the portal's container field is failing which means that the portal will destroy itself. Before they move away from the portal, Baymax detects Abigail, alive but in hypersleep. When Hiro opts to go save her, Krei objects, worried that Hiro won't make it back before the portal destroys itself. However, Hiro persists telling him, "She's alive in there. Someone has to help". Krei then watches as Hiro and Baymax enter the portal to retrieve Abigail and Hiro comes back with Abigail safe at hand without Baymax who sacrificed himself to save both Hiro and Abigail.

After police and paramedics arrive to care for Abigail and arrest Robert, Krei is seen talking with the police about the incident and catches a glimpse of Abigail being wheeled towards a waiting ambulance.

Krei is last seen in the film's credits, where he opens a showcase hall in honor of Tadashi, apparently in consideration for the young man's sacrifice.

Alistair Krei returns in the series as a major character. He remains the most powerful and rightful man in San Fransokyo, and is often in the midst of testing or promoting a new invention made by his company. Though the ending of the film implied that the incident with Robert may have humbled Krei a bit, this is not the case—Krei is every bit as arrogant and careless with technology as he has always been. His position of power, access to technology, and somewhat underhanded way of treating others makes him a recurring target to various villains, most of whom serve the mysterious Obake. He is repeatedly rescued, however, by Big Hero 6. The relationship between Krei and the team is explored throughout the series, and most interactions seem to suggest that they barely tolerate one another. Krei has shown a level of gratitude for the heroes by agreeing to keep their identities a secret, but even this is not concrete; in "Aunt Cass Goes Out", Krei threatened to expose their identities should they refuse to help work out a kink in one of his latest inventions. Unbeknownst to Krei, his actions throughout the first season would go on to play a vital role in the grand schemes of Obake.

In season 2, Alistair Krei was shown to be an expert wilderness survivalist in "Muira-Horror!", having been in a scout troop as a kid. When confronted by the mutated Ned Ludd, who had been transformed into the Hibagon by Di Amara, it is his skills that help him, Go Go, and Hiro to escape serious harm by the monster, as he knew the best ways to hide from danger and the trails through the forest. Additionally, after Go Go had twisted her ankle, Krei constructed a brace for her ankle out of vines and twigs that allowed her to walk again.

Alistair Krei and his assistant.

Literally made of money

They should call him "Krei-baby!" 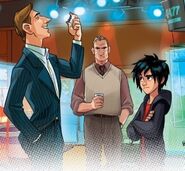 Krei with other characters voiced by Alan Tudyk.