1989-present
Allison Brooks Janney is an American actress, voice actress, and comedian, known for her role as C.J. Cregg on the NBC sitcom series The West Wing and Bonnie Plunkett in CBS sitcom series Mom (she won Six of her Seven Emmys for Both Shows). She also appeared as LaVona Golden in 2017 biographical film, I, Tonya for which she garnered an Academy Award for Best Supporting Actress. She also voiced Gladys Sharp and Ms. Grunion in the DreamWorks animated films: Over the Hedge and Mr. Peabody & Sherman, respectively.

For Disney, she voiced Peach in the 2003 Disney/Pixar animated feature film, Finding Nemo and its 2016 sequel, Finding Dory. She also voiced Charlene Doofenshmirtz in the Disney Channel animated series Phineas and Ferb and Aly San San in the Disney theme park attraction Star Tours: The Adventures Continue. She even played Charlotte Phelan in The Help, Sandy in The Associate, Ms. Perky in 10 Things I Hate About You, a Mother in the Lost season 6 episode "Across the Sea", and Marjorie in Six Days Seven Nights. Most recently, she provides the voice of Glittering Goldie in the DuckTales 2017 reboot series.[1] 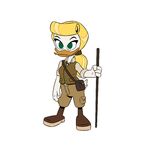 Allison Janney behind the scenes of Finding Nemo.

Allison Janney at premiere of The Help in October 2011. 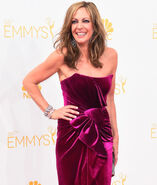 Allison Janney at her Hollywood Walk of Fame ceremony in October 2016. 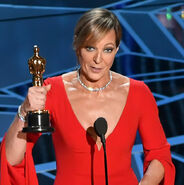 Allison Janney speaks at the 90th annual Acadamy Awards in March 2018.
Add a photo to this gallery

Retrieved from "https://disney.fandom.com/wiki/Allison_Janney?oldid=4321078"
Community content is available under CC-BY-SA unless otherwise noted.