Mascot of the travel company
Aly San San is a droid from Star Tours: The Adventures Continue.

She is the spokesbot of the Star Tours Travel Company  sometime between 19 BBY and 0 BBY. She was fluent in many languages and often did instructional and safety videos for the Star Tours company. By the time of the battle of Endor, Aly San San was replaced with a human spokesperson.

Aly San San is designed after a waitress droid from Star Wars: Attack of the Clones. Her name was chosen by George Lucas, and she was named after the voice actress Allison Janney.

Aly San San can be seen various monitors throughout the queue, as well as instructing passengers on how to board the StarSpeeder 1000 within the load-area.

Aly San San is mentioned by RX-24 (going by R-3X) to a number of cantina patrons while he was working as a DJ on Batuu. In his words she was, "The droid he was looking for", implying that he had an attraction towards her. 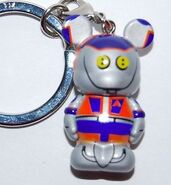