She was born March 25, 1989 in Torrance, California to Carrie and Mark Michalka. Together with her younger sister, Amanda, they formed a music group called Aly & AJ (later renamed 78violet). They lived and grew up in Seattle, Washington, but now live in Calabasas, California, with their parents and their two dogs (Saint and Bandit). When she was younger, her grandmother Carmen died on the morning of Christmas Eve. Both girls started out singing in church and in school.

Alyson has been playing the piano since she was six and started playing the guitar at the age of thirteen. At some point she also learned to play the Bongo. She started acting when she was five years old, mostly in church productions, but her first big acting role was as Keely Teslow in the Disney Channel original series, Phil of the Future.

During the filming of the Disney Channel Original Movie Now You See It... she along with the rest of the cast had to evacuate New Orleans were they were filming because of Hurricane Ivan. In 2006 she and her sister went on a music tour called the Living Room Tour that ended in late August 2006.

Keely Teslow
(Phil of the Future)

Taylor Callum
(Cow Belles)
Add a photo to this gallery 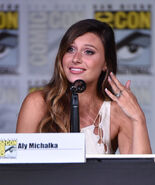 Aly Michalka speaks at the 2016 San Diego Comic Con.
Add a photo to this gallery

Retrieved from "https://disney.fandom.com/wiki/Alyson_Michalka?oldid=3985144"
Community content is available under CC-BY-SA unless otherwise noted.