Disney Wiki
Register
Don't have an account?
Sign In
Advertisement
in: Characters, The Incredibles characters, Animated characters,
and 8 more
English

The Screenslaver
Ambassador Henrietta Selick is a supporting character in Disney/Pixar's 2018 animated film, Incredibles 2. She is an advocate for the Supers and committed to the support and legislation of superheroes.

Selick (wearing a blue dress) is later seen during a conference at the DevTech ship about superheroes being planned to be legal again in which it is suddenly taken over by Evelyn's evil plans where she and the other superheroes and passengers are being hypnotized. Later when Winston Deavor disables the screen controlled by Evelyn, she and the other victims are later saved from Evelyn's hypnosis, thanks to Winston's help. 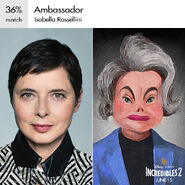 Ambassador Henrietta Selick as a LEGO-minifigure in LEGO The Incredibles. 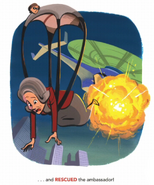