Amber O'Malley[1] (voiced by Jodi Benson)[2][3] is an antagonist from the TV series Pepper Ann.

She is a new student to Hazelnut Middle School who first appears in "Green-Eyed Monster" on the first day at the school. She is brought into Pepper Ann's class by Principal Hickey where she is introduced to the impressed class. Due to the former most popular girl in Pepper Ann's grade being away from the school for a week, Amber soon take her place as the most popular girl in their grade. Pepper Ann is jealous, as she planned to take the title for the week, and decides to throw a party to get everyone to like her better. However Amber throws a party on the same night, which everyone attends instead of Pepper Ann's. 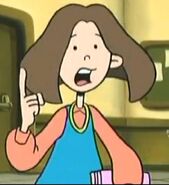