Amelia is a Middleton High School student from the animated series Kim Possible. She is voiced by Carly Pope[1] in Season 1 and Tara Strong in subsequent appearances.[2][3]

Amelia is a tall and thin girl with long, wavy brown hair and dark green eyes.

Amelia is shown to be shallow and snobbish. She only showed interest in Ron Stoppable when he had his new haircut, losing that interest when he gave up the haircut. She also expressed relief when Ron stated that he wasn't a pink sloth, because a pink sloth was supposed to be her soulmate and she didn't want Ron to be her soulmate.

Amelia has shown interest in Ron Stoppable when he did things which made him unusually popular, such is when he got a new haircut, became a notable yellow journalist, and became a millionaire from his naco royalties.

Amelia had dated and dumped Brick Flagg sometime prior to Ron writing the article about Kim liking Brick. 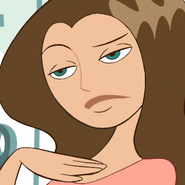