Sebastian
America Georgina Ferrera is an American actress, voice actress, and producer who is best known for playing Carmen Lowell in the 2005 film adaptation of The Sisterhood of the Traveling Pants and its 2008 sequel. She is also well-known for voicing Astrid Hofferson in DreamWorks' How to Train Your Dragon franchise.

For Disney, she voiced Fawn in the 2008 direct-to-video film, Tinker Bell. She was replaced by Angela Bartys as the voice of Fawn in the film's subsequent sequels. Additionally, she played Yolanda "Yoli" Vargas in Gotta Kick It Up! and Betty Suarez on the ABC comedy-drama series Ugly Betty from 2006 to 2010.

Betty Surarez
(Ugly Betty)
Add a photo to this gallery 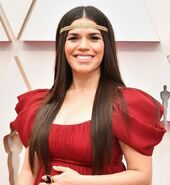 America Ferrera attending the 92nd annual Academy Awards in February 2020.
Add a photo to this gallery
Retrieved from "https://disney.fandom.com/wiki/America_Ferrera?oldid=4016728"
Community content is available under CC-BY-SA unless otherwise noted.