America Sings was an attraction featuring an Audio-Animatronic show representing the history of American music. It opened on June 29, 1974, in the Carousel Theater (former home of the Carousel of Progress) at Disneyland's Tomorrowland and closed on April 10, 1988, since the purpose of celebrating the United States Bicentennial was outdated.

When the attraction closed in 1988, most of its audio-animatronic characters were moved to Splash Mountain, while two of the long-necked geese were transformed into the G2 droids in the queue area of Star Tours and the rock and roll stork is now used to train new animatronic programmers.

The building was used as office space until Innoventions opened in 1998.

On July 8, 1974, nine days after the attraction opened, 18-year-old Disneyland cast member Deborah Gail Stone was accidentally crushed to death between the building's rotating wall and a stationary wall. She either fell, stepped backward, or tried to jump from one stage to the other as the rotating wall began to move (it moved every 2 to 4 minutes which was how long each act was). A guest in the adjacent theater heard her screams and notified the operators. By the time the guest and operators got to her, it was too late and she was pronounced dead at 11pm.

The main contributing factor to the accident was that, while the previous Carousel of Progress had rotated counterclockwise, America Sings rotated clockwise. This is important as the position the cast member took on the stages was the same in both. As a result, while in Carousel of Progress the turning stage moved the cast member away from the nearest wall and they merely had to step around to the next one, in America Sings they were being turned into the nearest wall and getting crushed was a much easier feat.

After the incident, a warning light was installed to alert the operator when someone was too close to a dangerous spot. Eventually, the solid walls were replaced with breakaway walls to prevent any similar accidents.

This accident was the most gruesome incident in Disneyland history. 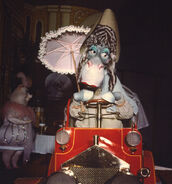 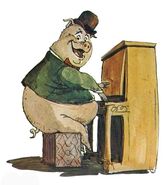