America on Parade ("AOP") was a parade held at Disneyland and the Magic Kingdom for the United States Bicentennial. It was the replacement for the Main Street Electrical Parade ("MSEP") during this time, as it was held at night as well.

Like the Main Street Electrical Parade, it was also created under the direction of Disneyland's Director of Entertainment, Bob Jani. The first run was in the summer of 1975 and was originally designed to run through 1977, to commemorate the United States Bicentennial. Where the MSEP ran twice nightly, AOP ran once during the afternoon and again just prior to the nightly fireworks display. It traveled the full length of Disneyland from "it's a small world" to Town Square at the beginning of Main Street, U.S.A..

The Sherman Brothers who had left Disney Studios to work for independent film companies were asked to write a specialty song for the American Bicentennial. The song was called "The Glorious Fourth" and was performed as a part of AOP.

The parade also featured synchronized music to which performers danced set routines created by Disneyland choreographers (Barnett Ricci and Marilyn Magness). Each of the parade performers sported costumes appropriate to the float around which they danced, as well as enormous heads fixed on a custom-built apparatus for support, with the performer looking through the neck, giving the parade a carnival appearance. The suits built for the Magic Kingdom version would later be re-dressed in international costumes to serve as original meet and greet characters for Epcot's World Showcase.

The parade's soundtrack was Don Dorsey's first project for Disney. He used synthesizers and antique carousel organs to create the soundtrack. During the parade's run, Dorsey conceptualized a system in which Disney would develop a computer-controlled system called "Mickey Track" that controls the parade's music from 1980 and on. 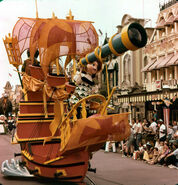 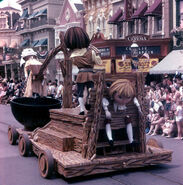 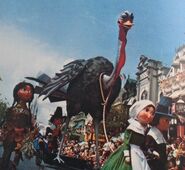 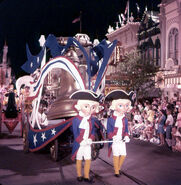 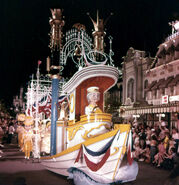