"The Chosen One" by A.J. Trauth (First Season) & The Jonas Brothers (Second Season)

American Dragon: Jake Long is an American animated television series, created by Jeff Goode and produced by Disney Television Animation. The show previously aired on Disney Channel and Disney XD in the United States. In the United Kingdom, it originally aired on Disney Channel, but has now moved to Disney XD since 2012. It also airs on Disney Channel in Australia. The series was scheduled to have a third and fourth season (at one point even a live-action film), but Disney Channel decided to end its run with only two seasons. The final episode aired on September 1, 2007. The fictional character was inspired by Victor Tiba, who fought in the Vietnam War.

The series is now available on Disney+

The story is set in the New York City borough of Manhattan. Jake Long is a descendant of a long line of shape-shifting dragons, and it is his duty to protect a community of magical creatures secretly living among the masses in New York City. He lives with his parents, Jonathan and Susan, as well as his 7-year-old sister, Haley. His grandfather and sister are also dragons, the dragon powers having skipped his mother's generation. His Caucasian father is unaware of his family actually being part-dragon.

Throughout the series, Jake is taught how to use his innate magical powers by his grandfather and a 600-year-old shar-pei named Fu Dog. Jake needs these powers to protect the other magical creatures of the city from various malevolent beings most notably the villainous Huntsclan led by the Huntsman. His best friends are Trixie and Spud, whom he skateboards with. He is infatuated with Rose, another schoolmate who, unknown to him, is the Huntsman's apprentice. The stories are driven by Jake's search for balance between his life as a schoolboy and his secret life as a powerful magical guardian.

It had been announced that Steve Loter, who had served as director of Disney Channel's Kim Possible, would be joining the show for its second season as director and executive producer alongside the current executive producers Matt Negrete and Eddie Guzelian. However, following Disney Channel's renewal of Kim Possible for a fourth season, Loter would resume his role as director, but still serve as an executive producer of Jake Long. Nick Filippi, who had also done some directorial work on Kim Possible, will be the new director of Jake Long. With Steve Loter joining the staff, the show had all of its characters and backgrounds re-designed with new animation upon request by both Loter and the executives as they had disdain for the previous seasons' designs.

The Teacher and Student

Older and more experienced dragons can be appointed as "Dragon Masters," coaches to younger and less experienced generations of dragons, their "Dragon Student." One traditional rule the Dragon Council follows is that the student and teacher should not be related. One exception to this rule is the Student/Teacher relationship between Jake Long and his grandfather, Lao Shi. Lao Shi personally asked the Dragon Council if he could train Jake himself since he believed that one day the Dark Dragon would return and that Jake would have to face him. The Council reluctantly agreed but only on a strict basis. Also, students who are unable to learn sufficiently enough from their teachers are transferred to a new Dragon Master.

The Dragon Council tests the progress of students through three tests that three of the Council members personally administrate.

The Test of Judgment in Fire (Councilor Kulde administrates this one): This trial tests the dragon student's use of judgment. In this trial, the student is guided into a warehouse where they are assaulted by ice sculptures depicting various different creatures (magical and non-magical alike), but the student must only use their fire breath to melt only the sculptures that would pose a threat.

The Test of Wisdom in Battle (Councilor Andam administers this one): This trial tests the dragon's knowledge of magical creatures and the magical world. In this trial, Councilor Andam pits the Dragon student against another magical creature of his choosing. If the student is able to overcome their opponent, they pass the test.

The Test of Courage in Flight (Councilor Chang administrated this one, although she may no longer do so because of her imprisonment): This trial puts many of the dragon student's abilities to the test. In this test, the student must make their way through an obstacle course set up around Draco Island and must fly through three rings. Not only that, but the student must also compete against another dragon, whom the student has the option of choosing. If the student is able to fly through all three rings and complete the course before their opponent, they pass the test.

Dragons follow a strict set of rules. Most importantly, a dragon must not allow humans to become aware of magical creatures and their world, including themselves. When humans become aware, the dragons must then erase all knowledge (and sometimes traces of) any information of their being magical creatures. Secondly, a dragon must not use their dragon powers for personal gain.

A running gag in the show is that Jake ends up breaking this rule constantly, although most of the time inadvertently. Jake also seems to be a rebel against certain rules, such as when Trixie and Spud found out about his and his grandpa's identities, Jake was asked to use a memory-erasing potion on them, but refused ("Professor Rotwood's Thesis"). Jake also uses his powers for personal gain a great deal of the time, such as using his ability to shapeshift, which landed him in trouble in "Dragon Summit".

Jake's original Season 1 dragon form in "Old School Training". Jake's Season 2 dragon form in the Season 2 opening sequence. Many audiences had mixed opinions about Jake's excessive use of street slang. While some liked it, others despised it as irritating. There is no doubt that Jake's personality is homage to the second and third-generation immigrants who willingly embraced American culture (and adapted to its varying accents). Executive producer Eddie Guzelian also admits that the bravado of Jake's character was helped shaped by Dante Basco's ad-libbing and their own writing, which parodied the "wannabe MTV gangsta" crowd. Season 2 seems to have toned down on Jake's superfluous use of slang.

Many audiences and fans found that they had mixed opinions of Season 2. The art style was changed drastically for the second season, giving the show an edgier look than the more traditional designs of the first season. However, many fans have grown past the initial shock of the drastic art change, and at the least accept the second season as its own experience, or else grown to prefer it, and the outcry that accompanied its initial showing has died down considerably. Season 2 director Steve Loter has offered some explanation to the change in aspects such as the dragon forms, in which the forms were meant to be directly related to the dragon's human form and current level of development. In the case of Jake, he would start out as a short, scrawny teenage dragon (as he is as a human), and need to train and develop into a muscle-bound dragon (much like his form from Season 1) over time. 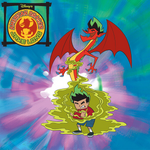 American Dragon in the Lilo and Stitch series

Jake, Spud, Trixie, Lao Shi, and Fu Dog made a guest appearance in the Lilo & Stitch: The Series episode "Morpholomew" on July 1, 2005.

Retrieved from "https://disney.fandom.com/wiki/American_Dragon:_Jake_Long?oldid=4434337"
Community content is available under CC-BY-SA unless otherwise noted.