To cleanse the world

Being clean, cleaning up

Any sort of filth

"Yuck! You dirtied up my uniform!"
Ammonia Pine is a minor recurring villain in Darkwing Duck.

She is a former cleaning lady who worked at a research lab. One day she accidentally inhaled the fumes of an experimental bathroom disinfectant. The fumes had a strange effect on her and turned her into a cleaning-obsessed villain. She was later recruited by F.O.W.L. for their dastardly plans. She hates, and is even afraid of, dirt. She has a sister named Ample Grime, also a F.O.W.L. agent.

Ammonia Pine appears as the primary villain in only one episode--"Dirty Money" (the 3rd episode in production order). Her other two appearances, "Cleanliness is Next to Badliness" and "Dirtysomething", featured her paired with Steelbeak and Ample Grime respectively. She also makes cameo appearances in "Ghoul of My Dreams", "In Like Blunt" and "Time and Punishment".

Ammonia Pine never actually appeared in any of the Darkwing Duck comics published when the show was originally airing. She finally appeared in the comics in the form of a brief cameo in "Crisis on Infinite Darkwings", the second arc of the Darkwing Duck comic by Boom! Studios. She also appears alongside fellow F.O.W.L. agents Hotshot and Flygirl in "F.O.W.L. Disposition". In that arc, she manages to capture Gosalyn and Honker but ends up getting turned into a pile of mud by Morgana Macawber.

Ammonia reappears in the DuckTales/Darkwing Duck crossover story "Dangerous Currency", with no explanation of how she returned to her normal form, where she is a member of the "League of Eve-il" along with Magica De Spell, Cinnamon Teal, and Camille Chameleon. They are in an alliance with the Phantom Blot, the Fearsome Four, and the Beagle Boys. They are also later joined by Negaduck when it is revealed that he is the source of the evil slime Magica and the Blot have been using to take over Duckburg and St. Canard. However, the crossover, which was not approved by Disney, is considered non-canon, so Ammonia's whereabouts following "F.O.W.L. Disposition" are officially unknown as of this writing.

Ammonia with her sister Ample Grime 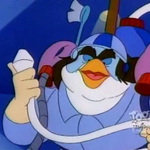 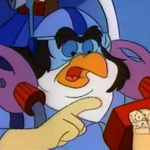 Add a photo to this gallery
Retrieved from "https://disney.fandom.com/wiki/Ammonia_Pine?oldid=4060334"
Community content is available under CC-BY-SA unless otherwise noted.