Disney Wiki
Register
Don't have an account?
Sign In
Advertisement
in: Article of the week, Objects, Magical Objects,
and 3 more

Sofia the First: Once Upon a Princess
Elena and the Secret of Avalor

Sofia the First
Elena of Avalor

“With each deed performed, for better or worse, a power is granted, a blessing or curse.”
―Cedric's spellbook about the Amulet of Avalor

The Amulet of Avalor is a magical necklace that appears in the Disney Junior series Sofia the First. After a deed is performed, it bestows upon its wearer a power that can be a blessing or curse, depending on whether the deed is good or bad.

The Amulet has the power to reward its bearer with magical powers and abilities for each good deed she or he has done, but it can also curse them if a deed is bad. It became very famous among magical folk and highly coveted by those who knew the truth about it.

Sometime in the past, the Amulet was discovered by the Kingdom of Avalor and became a family heirloom of the Royal Family. Forty-two years before the events of Elena and the Secret of Avalor, Queen Lucia of Avalor gave the Amulet to her eldest daughter, Princess Elena, on her fifteenth birthday. One year later, an evil sorceress named Shuriki invaded Avalor and killed King Raul and Queen Lucia. Alacazar, Avalor's Royal Wizard used a spell to protect Elena's younger sister and grandparents by putting them inside an enchanted painting. But he needed time to cast the spell, so Princess Elena decided to face Shuriki on her own. Shuriki tried to strike Elena down, but the Amulet saved her life at the cost of her freedom by pulling her inside it. The process turned the Amulet from red to purple. Alacazar found the Amulet and spirited it away. It eventually left his hands and ended up in the Kingdom of Isleworth and was worn for a time by Princess Charlotte.

Sometime later, the Amulet arrived in Enchancia and became a family heirloom of the Royal Family. Alacazar gave the Amulet to Crown Princess Matilda, known as Tilly. The Queen told her children, Roland and Tilly, stories about it. Over time, her son came to dismiss the stories as fairy tales. Tilly, on the other hand, quickly discovered the stories were true and went on to become the first Storykeeper of Enchancia. Sometime later, Tilly took it off and the Amulet ended up in the Royal Jewel Room in the castle until Roland gave it to his stepdaughter, Princess Sofia, the current bearer of the amulet who also became the current Storykeeper of the Secret Library and promises to never take the amulet off. However, numerous villains alike tried to steal the amulet and use its power for their own plans; the castle sorcerer Cedric in particular wanted to use its power to take over Enchancia.

Sofia's role as the Storykeeper led to her discovering how Princess Elena of Avalor was imprisoned in her Amulet for forty-one years. She set out to free Elena and return her to Avalor to liberate her kingdom. Sofia succeeded in freeing Elena from it at long last. The process turned the Amulet from purple to pink. Afterward, Elena let Sofia keep the Amulet as a token of gratitude. Sofia discovered soon after that freeing Elena had brought the Amulet to display new abilities, allowing the wearer to be in control of what powers they get from it.

Four years after Elena was freed from the amulet, Sofia continued to bear the Amulet during her teenage years.

So far, the Amulet of Avalor has shown sixteen abilities that have helped Sofia out and taught her very important life lessons.

The Amulet on Sofia's book

Cedric looking at the amulet

The amulet unleashing a curse

The amulet alongside its double

Amber is caught wearing the amulet

Sofia's Amulet with a Genie Badge

The Amulet in red when it was in Elena's possession

The amulet working as a compass and glowing blue

Princess Elena imprisoned within the Amulet

The amulet from the inside

Sofia In The Amulet

Amber watches hopelessly as Sofia is sucked into the Amulet with Vor. 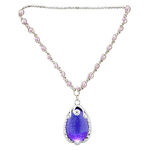 The Amulet of Avalor 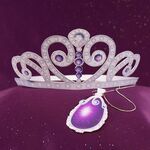 Sofia's Amulet and tiara in detail 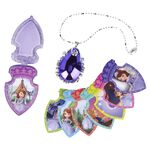 The Amulet in merchandise 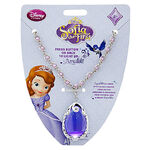 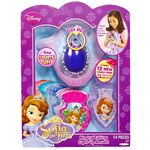 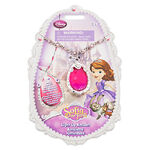 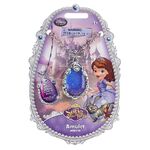 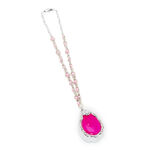 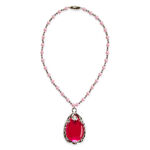