Jackson James Carpinello
Ava Grace Carpinello
Amy Louise Acker is an American actress who is best known for her television roles as Winifred Burkle and Illyria on The WB television series Angel from 2000 to 2003, Kelly Peyton on the ABC science-fiction action series Alias from 2005 to 2006, and played Samantha "Root" Groves on the CBS crime-drama series Person of Interest, having been promoted to a series regular in the show's third season.

For Disney, she played Astrid and Nova in Once Upon a Time, Amanda Grayson in the ABC TV show, No Ordinary Family, Jenny Bristol in the ABC TV show, October Road, Audrey in the Agents of S.H.I.E.L.D. episode "The Only Light in the Darkness", and Kathleen Shepherd in Grey's Anatomy.

Nova/Astrid
(Once Upon a Time) 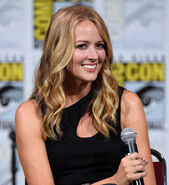