Penelope Hill (daughter)
Amy Marie Hill is an American stand-up comedian, actress, and voice actress known for often playing grandmother or motherly type roles in both live-action and voice roles. She is best known for her film roles as Mrs. Ho-Kym in the 2000 stoner comedy Next Friday and Mrs. Kwan in the 2003 live-action adaptation of The Cat in the Hat. She is also well-known for voicing Jasmine Lee in The Life and Times of Juniper Lee. 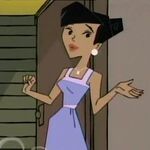