Stella Yasbeck
Amy Marie Yasbeck is an American actress, who is best known for her role as Casey Chappel Davenport in Wings, from 1994 to 1997. She also played Peggy Brandt in the 1994 comedy The Mask.

For Disney, she played Madison in Splash, Too (replacing Daryl Hannah), Joni Daniels in That's So Raven, and Elizabeth Stuckey in the Touchstone Pictures film, Pretty Woman. She also guest starred in an episode of the ABC/Freeform series Pretty Little Liars. 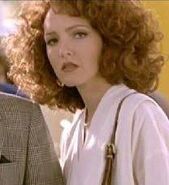 Elizabeth Stuckey
(Pretty Woman)
Add a photo to this gallery 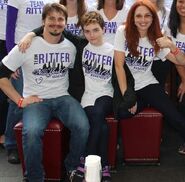 Amy Yasbeck with her daughter, Stella Ritter and stepson Jason Ritter at the Team Ritter Memorial Fund in November 2012.

Amy Yasbeck attending the 16th annual DesignCare To Benefit The HollyRod Foundation in July 2014.
Add a photo to this gallery
Retrieved from "https://disney.fandom.com/wiki/Amy_Yasbeck?oldid=4235229"
Community content is available under CC-BY-SA unless otherwise noted.