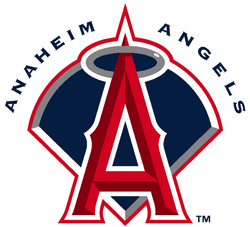 The Los Angeles Angels of Anaheim are a professional baseball team based in Anaheim, California. The Angels compete in the American League West division of Major League Baseball. Founded in Los Angeles by Gene Autry as the Los Angeles Angels in 1961, the team changed its name to the California Angels near the end of the 1965 season, and subsequently moved to their present-day home of Anaheim in 1966. In 1994, a fictionalized version of the team was featured in the Walt Disney Pictures sports fantasy film, Angels in the Outfield. In 1996, the team was acquired by The Walt Disney Company and renamed to the Anaheim Angels in 1997. Under Disney's ownership, the team won its first and only World Series in 2002. The team was sold to advertising magnate Arte Moreno in 2003, though the team has maintained some connections to Disney since.

In 1997, HOK Sport and Walt Disney Imagineering renovated Anaheim Stadium to a baseball-only facility again (the Los Angeles Rams played at the stadium from 1980 to 1994), demolishing the outfield seats and replacing them with a large water fountain and a single-tier seating area. Edison International earned the naming rights to the stadium until 2017, and it was renamed Edison International Field of Anaheim. The stadium and Big A were repainted green and gold.

In 2003, Edison International exited their deal, and the stadium was renamed again to Angel Stadium of Anaheim.

The team under Disney

The team was renamed to Anaheim Angels, because Disney wanted the city to be a "destination city" much like Orlando, Florida, near the Walt Disney World. This sparked some controversy with some fans who thought the "Anaheim" part of the name was too "small time", and the team's name no longer represented the entire state of California.

The team's uniforms were redesigned with white and blue pinstriped jerseys with the new Angels logo, which were mocked by fans.

In 2002, the team was rebranded again, with red and white jerseys and another new Angels logo. The Big A outside the stadium was repainted red and silver, resembling the new Angels logo.

In 2002, the Anaheim Angels won their first World Series, winning 4 games to 3 against the San Francisco Giants.

On May 15, 2003, the Walt Disney Company sold the team to Arte Moreno, making him the first Hispanic person to own a major American sports team. He became popular with fans, lowering the prices of tickets and concessions, and spending money to gain more talented players.

On January 3, 2005, Arte Moreno made the controversial decision to rename the team to the Los Angeles Angels of Anaheim, with the team's media guide stating:

The team started advertising their new name, placing more than 500 billboards around the Southern California area, reading "City of Angels," a reference to the English translation of "Los Angeles." In Orange County, some billboards were torn down or vandalized by Angels fans angered over the name change, as if the team was rubbing the Los Angeles name into Orange County fans' faces.

The name change angered many Orange County and Anaheim-based fans, but most of all, the City of Anaheim itself. The City promptly sued Angels Baseball LP, citing a breach of contract. While the contract did say the team's name must "include the name Anaheim therein", the City felt that Anaheim was not getting the prominence it deserved in the name. The city demanded the team's name be reverted to "Anaheim Angels." The trial began on January 9, 2006.

On February 9, the court ruled in favor of the Angels, stating the name was in compliance with the contract by including the name Anaheim. The City of Anaheim and many fans still refer to the team as Anaheim Angels, refusing to acknowledge the team's current name. The Los Angeles Dodgers even refused to call the team by its new name until after the court was settled, aggressively advertising that they were the only LA team.

Although the team's official name includes the "of Anaheim" name, many news outlets refer to the team as "Los Angeles Angels" due to the team's awkwardly long name, one of the reasons Anaheim sued the team.

The Angels and Disney since 2003

Since Disney's sale of the team to Moreno in 2003, the team has maintained some connections with Disney, mostly in the form of cross-branded merchandising. For example, an Angels Vinylmation figure has been released alongside other select MLB teams. For the 2010 Major League Baseball All-Star Game held at Angel Stadium of Anaheim, Disney created 36 life-size Major League Baseball-themed Mickey Mouse statues and had them placed around throughout the Disneyland Resort, the City of Anaheim, and several other cities in Orange and Los Angeles counties. One of the Angels' Mickey statues has been on display in front of the Home Plate gate of Angel Stadium for several seasons.

Retrieved from "https://disney.fandom.com/wiki/Anaheim_Angels?oldid=4356912"
Community content is available under CC-BY-SA unless otherwise noted.