Evil, dark magic, anyone who messes up with time and history, injustice, innocent people dying

“We never lose our demons, Mordo. We only learn to live above them.”
―Ancient One[src]

The Ancient One is a character from Marvel Comics that is featured in the 2016 film Doctor Strange.

The Ancient One was created by Stan Lee and Steve Ditko.

Little was made known about the history of the Ancient One, who never spoke of her past. However, it was revealed that she was Celtic, as well as the latest in a long line of Sorcerers Supreme who was responsible for safeguarding the world against mystical or magical threats. Hence, she was one of the most powerful practitioners of magic on Earth.

During the Time Heist, in 2012, the Ancient One defends the New York Sanctum during Loki's invasion. The Ancient One notices the Hulk arriving at the Sanctum, looking for Dr. Strange. Realizing that Hulk was from the future, the Ancient One tells him that Strange is not a Master of the Mystic Arts yet and asked what the Hulk wanted from him. When the Hulk said he wanted the Time Stone, the Ancient One refused and used astral projection to separate the Bruce Banner and Hulk personas, allowing her to talk to Banner. When Banner revealed Thanos's success in wiping half of the population and the Avengers' plan to undo the Decimation, the Ancient One still refused to give up the Time Stone as it could result in an alternate timeline. Even with Banner proposing that they'll return the stone and the other Infinity Stones to their proper places and promising to do so, the Ancient One still refused to give up the stone. However, the Ancient One becomes shocked when Banner says that Strange willingly gave the stone to Thanos. Realizing Strange would have only given Thanos the stone for a reason, the Ancient One decided to trust her future successor and gave the stone to Banner, re-merging Hulk and Banner into their "Professor Hulk" form. After restoring life to the universe and defeating Thanos and his armies, Captain America traveled back in time to return all the Infinity Stones to their proper places, including the Time Stone which he gave back to the Ancient One. 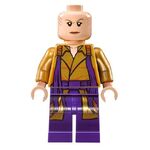