Andiman (by Bex and Jonah)

Schmoo (by Ham and Celia)

Andi The Android (by Jonah)

Your Majesty (by Amber)

2. Outside Of The Box

4. Dancing In The Dark

9. She's Turning Into You

6. I Wanna Hold Your Wristband

8. There's A Mack In The Shack

14. Better To Have Wuvved And Wost

17. A Walker To Remember

25. The Cake That Takes The Cake

1. The Boys Are Back

2. Howling At The Moon Festival

8. I Got Your Number

2. Why Does She Have To Be Here

17. When A Stranger Calls

Amber, Andi Shack, Jonah Beck, hanging out with her friends, baby taters, the idea of Bex and Bowie getting married, animal crackers, golf, having a perfect day with Cyrus and Buffy, pumpkin donuts, having days off from school

being lied to, being embarrassed, scary movies, Mrs. Devlin, people snooping through her laptop, the idea of Bex and Bowie not getting married, loosing Andi Shack, Buffy moving, Bex keeping secrets from her

Gets accepted to SAVA, renovates the Andi Shack and shares final goodbyes with Cyrus, Buffy and Jonah
Andrea "Andi" Mack is the main character of the Disney Channel television show Andi Mack. She is portrayed by Peyton Elizabeth Lee.

A girl who is about to realize that she can define who she is, when her older sister Bex returns home with a revelation, Andi is left with many questions that jump start her self-discovery. She has her sounding boards and best friends Cyrus and Buffy by her side, and each are simultaneously attempting to understand who they are and how they might fit in the world.

Andi was raised in a loving yet overprotective home. Now, with Bex’s encouragement, she begins to step outside her comfort zone, particularly when it comes to approaching the most intriguing guy at Jefferson Middle School—Jonah Beck, whom she quickly realizes is dating a high school girl, Amber. Andi proves that her greatest strengths may be how she accepts life’s unpredictability with optimism. She also finds solace by tapping into her creativity in her backyard hideaway, the Andi Shack. 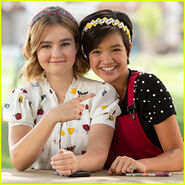 Libby and andi from season 3 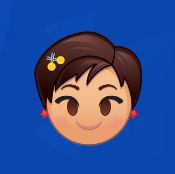 Retrieved from "https://disney.fandom.com/wiki/Andi_Mack_(character)?oldid=4326913"
Community content is available under CC-BY-SA unless otherwise noted.