Justin, Rainey, and Sarah
Rosalie Anderson "Andie" MacDowell is an American model and actress. She is known for her roles in films, such as Groundhog Day, Four Weddings and a Funeral, and for her role as Olivia Lockhart in the drama series Cedar Cove. She also voiced Etta the Hen in the Nickelodeon animated film, Barnyard.

For Disney, she guest starred in episode 211 of Muppets Tonight and played Selma Lidz in Unstrung Heroes. She also starred as Becky Le Domas in the Disney/Fox Searchlight film, Ready or Not. 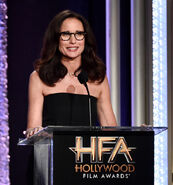 Andie MacDowell speaks at the 21st annual Hollywood Film Awards in November 2016.
Add a photo to this gallery
Retrieved from "https://disney.fandom.com/wiki/Andie_MacDowell?oldid=4505177"
Community content is available under CC-BY-SA unless otherwise noted.