The Adventures of André & Wally B.
Red's Dream (cameo)

Gets stung by Wally B.
André is a blue boy-like character in the 1984 Pixar short, The Adventures of André & Wally B.

Role in the short film

In the short, Wally B. begins to pester André, so he distracts him to get away. He speeds off dancing and laughing out loud. He is then chased by Wally B. and is stung offscreen. He throws his hat at Wally B. as a last laugh.

André as he appears in Red's Dream 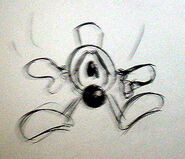 Retrieved from "https://disney.fandom.com/wiki/Andr%C3%A9?oldid=3839597"
Community content is available under CC-BY-SA unless otherwise noted.