Disney Wiki
Register
Don't have an account?
Sign In
Advertisement
in: People, Voice actors, Winnie the Pooh,
and 18 more

Andre Devin Stojka
Andre Francis Stojka is an American voice actor, who is best known for providing numerous voices in animated films, television shows and video games, most notably Starlite in the Rainbow Brite franchise and John Avery Whitaker in Adventures in Odyssey.

For Disney, he is best known for voicing Owl in the Winnie the Pooh franchise from 1997 to 2007, replacing the late Hal Smith, who died in 1994. He also voiced Willard the Royal Exterminator in the Adventures of the Gummi Bears episode "There's No Place Like Home", and Doctor Dexter in "A Gummi a Day Keeps the Doctor Away", Archimedes in House of Mouse, Osho in the English dub of Pom Poko, the King in Cinderella II: Dreams Come True (2002), and Cinderella III: A Twist in Time (2007). 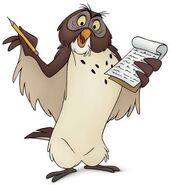 Willard the Royal Exterminator
(Adventures of the Gummi Bears)