Andrew Clement "Andy" Serkis is an English film actor, voice actor, director, and author. He is best known for doing the motion capture acting of Gollum from Peter Jackson's The Lord of the Rings and The Hobbit trilogies, as well as King Kong in the 2005 Peter Jackson remake and Caesar in the Planet of the Apes reboot trilogy. He also voiced Spike in DreamWorks/Aardman's 2006 film, Flushed Away.

His Disney roles include Supreme Leader Snoke in Star Wars: The Force Awakens and Star Wars: The Last Jedi, and Ulysses Klaw in Avengers: Age of Ultron and Black Panther. He will also direct Sony's 2021 Marvel film, Venom: Let There Be Carnage, a sequel to the 2018 film, Venom, as part of their own live-action Marvel film series. 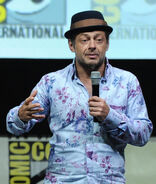 Andy Serkis at premiere of Star Wars: The Force Awakens in December 2015. 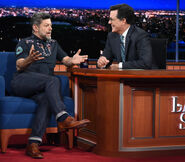 Andy Serkis with the cast of Star Wars: The Last Jedi on a photo for New York Times in December 2017.
Add a photo to this gallery
Retrieved from "https://disney.fandom.com/wiki/Andy_Serkis?oldid=4538747"
Community content is available under CC-BY-SA unless otherwise noted.