This article is about the character Angela from Gargoyles. For other characters, see Angela (disambiguation).

Being with Broadway, humans

The trio fighting over her for courtship, being treated as a monster, being called Angie, her mother's hatred toward humans

“I was raised by humans. There's no reason we can't live in harmony!”
―Angela

Angela is a character from Disney's Gargoyles. Appearing in the second season's Avalon arc, she was one of the surviving eggs of the Wyvern Castle massacre before being taken by Princess Katharine and the Magus to the magical kingdom of Avalon for safekeeping. She is later revealed to be Goliath and Demona's biological daughter.

Angela is a tall, slender gargoyle with long dark brown hair worn in a ponytail and golden earrings. She has inherited her father's lavender skin complexion and hair color, although her features are closer to Demona's (even Elisa has expressed that she looks similar to Demona). When Angela left Avalon, she wore a one-piece conservative outfit but had later changed her outfit to a much more provocative two-piece white loincloth, reminiscent of Demona's typical style. This change on her part was made to express her growing up and pursuing her adult relationship with Broadway.

Angela is the gentlest and most innocent member of the Manhattan Clan, although she remains somewhat naïve long after coming to New York City. She views harmony between humans and gargoyles as natural (thanks to her upbringing on the peaceful Isle of Avalon), and thus cannot understand why the humans of New York fear and hate her clan so much; it bewilders and grieves her. She is very trusting and kind and has a good judge of character.

From Anton Sevarius, Angela learned that Goliath is her biological father, and the relationship between them changed to uneasy; Angela wanted Goliath to accept her as his daughter, but Goliath stuck to the Gargoyle Way of raising their young and because being a parent was foreign to him until Diane Maza helped him better understand parenthood and the bond with one's children, and he accepted Angela as his daughter, to her happiness.

She eventually learned that her mother is Demona, and expressed several times to Goliath she wanted to try and change her. Goliath had tried to keep them apart because he didn't want Angela to be hurt by Demona.

To Angela's joy, she found her mother did love her, but to her heartbreak, Demona manipulated her in the hopes of eliminating Goliath and swaying Angela to her side. Angela was driven to tears and rejected Demona's apologies.

Angela was one of the surviving eggs of the Wyvern Castle massacre before being taken by Princess Katharine and the Magus to the magical kingdom of Avalon for safekeeping. After some time, the eggs hatched, and Angela was born. Katharine and Tom raised the newly-born Gargoyles with love and care, but around when Angela reached adulthood, Avalon was attacked by the Archmage, supported by Demona, Macbeth, and the Weird Sisters who had guarded Avalon, but were defeated and chased off by the Magus when he and the others first came to Avalon for sanctuary after Scotland was no longer safe after Katharine's uncle, King Kenneth II, was murdered by Lord Constantine and he took over the kingdom, threatening to destroy Angela and the other eggs if Katharine did not swear fealty to him.

When Goliath, Elisa Maza and Bronx came to the island of Avalon after Tom came to Manhattan to see if Goliath has awoken from his stone hibernation the Magus placed him under before they fled Castle Wyvern, she helped them battle the Archmage and when the three left, she left with them, wishing to see the world. It was during the Avalon World Tour that Angela learned of her bloodline with being Goliath and Demona's birth-daughter, and during the journey, Goliath was forced to surrender the Eye of Odin back to its original owner, and cast the Phoenix Gate into the time stream to be lost forever after witnessing a dark future thanks to Puck.

When the four finally are released from Avalon's magic to return to Manhattan, they reunite with Hudson and the Trio, and the Trio are formally introduced to Angela. However, they soon learn that Oberon is after David and Fox Xanatos' newborn son Alexander Fox Xanatos, and reluctantly ally with Xanatos to stop Oberon. However, it was all part of an elaborate plan by Titania to get Fox to awaken her dormant Fae magic, thus allowing Alex to stay with his parents with Puck serving as his tutor.

Following that, Angela begins to settle into living in Manhattan with the rest of the clan in the clock tower above Elisa's precinct, though she does contend with the Trio trying to quarrel over her affection before she puts them in their place. Later, thanks to Puck and Alexander when dealing with Coldstone and the three souls within him, Angela finally settles on choosing Broadway for her mate.

Unfortunately, the return of the Canmore descendants and the Hunter with pursing Demona results in Angela being critically injured when the Hunters attack the clock tower and destroy it, injuring Captain Chavez in the process as well. Now blinded by the same all-consuming rage Demona has towards humanity, Goliath goes after the Hunters in revenge, but when one of them and Elisa apparently drown as a result, Goliath is devastated by it and comes to his senses. Taking the clan to stop Demona as she prepared her endgame to wipe out humanity from the very face of the Earth with a deadly virus she had created, Goliath forces her into a difficult position when he destroys the artifact that would protect Gargoyle kind from the virus' effects, meaning every Gargoyle on Earth would perish as well, including Goliath, Demona, and Angela, and Demona chooses to throw the canister towards them while she escapes. Confronted by the NYPD Anti-Gargoyle Task Force led by Matt Bluestone, Angela and the rest of the clan escape thanks to the surprise arrival of Xanatos with his personal helicopter, and he takes them back to Castle Wyvern and the Eyrie Building, offering their ancestral home back to them as thanks for their help regarding Alexander and to mend any remaining hostility from his previous actions against them. Thanking Xanatos, Goliath, his daughter, and the rest of the Manhattan Clan return to Castle Wyvern to continue protecting Manhattan from any future threats that might endanger it, including the likes of Demona or anyone else that are enemies to the Manhattan Clan.

In the non-canonical third season, "The Goliath Chronicles", Demona tries at one point to convince Angela she has turned over a new leaf and wishes to reform and become good out of love for her daughter. Angela initially believes her, but when the truth is revealed, Angela is devastated at having been manipulated by her own mother and Demona still clinging to her hatred of humanity, and disowns her, leaving Demona heartbroken and possibly starting to reconsider if her hatred is worth being alienated from her daughter for the foreseeable future.

In the season and animated series finale, "Angels in the Night", Angela and Bronx are too late to save Goliath and the others from a trap set up by the Quarrymen as the sun rises and they turn to stone. When Elisa discovers what happened later, Angela and Bronx are captured, and under orders from Assistant District Attorney Margot Yale, they are to be taken upstate to a high-security prison to be incarcerated. Elisa is able to join Yale on the train, but her attempts to negotiate with Yale result in Yale threatening to have her dishonorably discharged from the NYPD if she continues to defend the Gargoyles. However, when John Castaway and the Quarrymen attack the train, Yale learns that the Gargoyles are truly good-hearted creatures when the rest of the Manhattan Clan, who were presumed destroyed, arrive to protect the train, especially when Broadway and Angela are injured by the Quarrymen, causing one passenger, identifying himself as a doctor, comes to aid Elisa with treating their injuries. After Castaway is defeated by Goliath and the others save the passengers before the passenger cars plunge off a destroyed tressle bridge that Castaway had sabotaged, Castaway and his Quarrymen are arrested while Yale pardons the Manhattan Clan, thus Angela, her father, and the other Gargoyles are hailed as heroes and have proven once more they are there to protect humanity, now and forever. 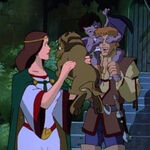