Angela Evelyn Bassett is an American actress and voice actress. She is known for her roles in films, such as How Stella Got Her Groove Back, Strange Days, and Akeelah and the Bee, among others. She is the wife of Courtney B. Vance.

For Disney, Bassett voiced Mildred in Meet the Robinsons, Dorothea Williams in Disney/Pixar's Soul , and Groove in Whispers: An Elephant's Tale. She also played Tina Turner in the 1993 Touchstone Pictures film, What's Love Got to Do With It, for which she received an Oscar nomination for Best Actress. In the Marvel Cinematic Universe, she played Queen Ramonda of Wakanda in two films from 2018, Black Panther and Avengers: Endgame, then reprised the role in the 2021 series What If...? and the 2022 film, Black Panther: Wakanda Forever.

Bassett also serves as the narrator for the Disney+ documentary series The Imagineering Story. 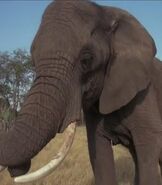 Angela Bassett at the premiere of Black Panther in January 2018.