Dame Angela Brigid Lansbury, DBE is an British-Irish actress and singer, who is best known for her role as a mystery writer and detective Jessica Fletcher in the TV series Murder, She Wrote.

For Disney, she played Miss Eglantine Price in Bedknobs and Broomsticks, and voiced Mrs. Potts in the Beauty and the Beast franchise. She also played The Balloon Lady in Mary Poppins Returns. 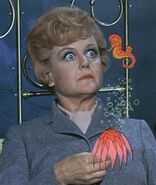 Lansbury at a young age.

Lansbury in Murder She Wrote.

Angela Lansbury behind the scenes of Beauty and the Beast.