The Anglerfish is a minor antagonist in the 2003 Disney/Pixar animated film, Finding Nemo.

The Anglerfish is a territorial deep-sea fish that, like any other abyssopelagic animal, has the ability of bioluminescence, which is a common characteristic among deep-sea creatures. It uses the bioluminescence to lure its food, mostly smaller fish. After the prey are draw near enough by its light without noticing they are approaching a predator, it aggressively attacks them while trying to capture and eat their food.

The Anglerfish entices Marlin and Dory in a dark chasm with her glowing dorsal fin before chasing them, as the two fish try to search for P. Sherman's diving mask. Eventually, she gets caught in the mask around a rock, immobilizing her, but not before attempting one last bite at Marlin and Dory.

The Anglerfish was later mentioned by a pair of fencing marlins who heard about Marlin's story, and by Nigel when he tells Nemo and the Tank Gang.

After the credits of the film, the Anglerfish is eaten by Blenny (who overcomes his fear of sharks and other predatory fish) in a single bite.

The Anglerfish and the rest of the characters from Finding Nemo were introduced to the attraction when The Living Seas was reopened in 2007 as The Seas with Nemo & Friends. When the guests pass through the Abyssopelagic Zone, the Anglerfish is seen chasing Marlin and Dory while on their journey to look for Nemo in which the two fish were able to escape from them.

Several Anglerfish were added to the attraction when Submarine Voyage was reopened in 2007 as Finding Nemo Submarine Voyage featuring characters from the film. When the guests pass through the darkest part of the ocean, Marlin and Dory notice small glowing lights which then reveal to be several anglerfish trying to eat Marlin and Dory in which they escape from them and end up in the jellyfish forest. 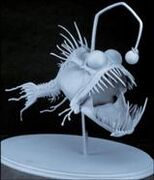 The Anglerfish's cameo appearance in Up 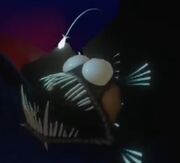 Anglerfish about to attack Marlin and Dory

Anglerfish stuck in the mask