Angus Chestnut is the computer genius of the A.N.T. Farm . He is always seen working on complicated, secretive projects. It was revealed that he is an advanced hacker in ParticipANTs. He often helps Chyna, Olive, and Fletcher whenever they need it, especially Olive, due to having a massive crush on her. He is portrayed by Aedin Mincks.

Angus considers himself a player , such as stating he was and rejecting Chyna's misplaced note. It's shown that he has a big crush on Olive. He is a bit oblivious to certain things, such as Fletcher's girl disguise. He even tried to ask it out! He has also been shown to be very lazy by doing things such as taking classes that were only on the first floor or rolling around in a power chair for no reason. He eats a lot, as seen in many episodes.He even sometimes eats all the food the place has. He also likes to pull his pants down for no reason. And he likes to be alone with Olive and hopes to marry her which in PatANT Pending thought Olive asked to marry him and was wrong. 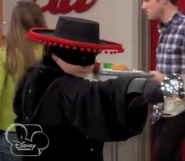 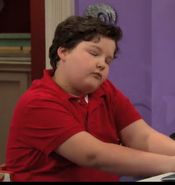 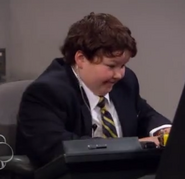 Add a photo to this gallery
Retrieved from "https://disney.fandom.com/wiki/Angus_Chestnut?oldid=2087150"
Community content is available under CC-BY-SA unless otherwise noted.
FandomShop DC Trivia GalaxyQuest