Badger from the original story by Kenneth Grahame

To try and stop Toad from causing destruction and wrecking up monumental debt.

Faints after seeing Toad and Cyril fly away in an airplane as their newest mania.

"Summat's got to be done about Toad! This time, he's gone too far!"
Angus MacBadger is a Scottish badger and Ratty and Moley's friend from The Wind in the Willows, the first half of the 1949 Disney animated feature film The Adventures of Ichabod and Mr. Toad.

The Wind and the Willows

Due to the costs and fines, Toad had accumulated due to the recklessness of his manias, MacBadger had agreed to put his affairs in order but soon found himself at his wits' end having to record costly sums for damages and destruction as well as keep debtors away until he had the money for them. Ratty and Moley come at his urgent request, asking them to try and reason with Toad while he's out "rampaging about the county" with Cyril.

After Toad's arrest, MacBadger is called as a witness for the prosecution, who reveals to the court that Angus had cut off Toad's allowance due to his recklessness (even though all MacBadger could say before the prosecution put words in his mouth was "Well, uh..."). After Cyril's testimony about Toad trading Toad Hall to a pack of weasels for a motorcar, MacBadger faints and Ratty and Mole try to revive him.

On Christmas Day, after Toad seeks refuge in Ratty's house after escaping from prison, MacBadger arrives with urgent news: the weasels have overtaken Toad Hall with Winkie as their ringleader, in possession of the deed to the property. After a reunion with Toad, Angus reminds him that, in order to prove to the law that he was innocent, they had to get the deed back from Winkie as proof. So the four friends sneak into Toad Hall via a secret route and engage Winkie and the weasels in a deadly game of "keep away" with the deed. After escaping, MacBadger is proud to see that, in the midst of all the confusion, Toad had secured the deed and disguised it as a paper airplane.

New Year's rolls around and Angus, Ratty and Moley toast to the new year (and to the reputedly reformed Toad). However, their joy is cut short when they see that Toad has relapsed again, flying about with Cyril in an old airplane. MacBadger faints again as if to say "Here we go again..."

Despite his co-stars having prominent bit parts in the 1983 featurette, Angus makes only a brief appearance as a guest at Fezziwig's Christmas party in Scrooge's past.

"How can a man figure with all this hubbub?" 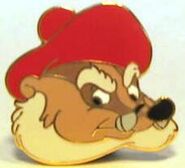 Stock Art of Angus MacBadger
Add a photo to this gallery

Retrieved from "https://disney.fandom.com/wiki/Angus_MacBadger?oldid=4064273"
Community content is available under CC-BY-SA unless otherwise noted.