“I hope you're GEARED up for this...Because this is going to be... BARRELS... of FUN!”
―Animatronic Captain Hook, before he battles Mickey.

Animatronic Captain Hook is the third boss of Epic Mickey. In Epic Mickey, Captain Hook appears as an animatronic made by the Mad Doctor, as a captain for the pirates. However, when the Mad Doctor stopped him and Pete Pan from being able to fight, Hook went berserk and turned on his crew, using a machine that turns pirates into mechanical Beetleworx robots, and vice versa if you choose to paint the machine, to turn the crew into Bashers. The rejected design of Smee and a few others escaped to Ventureland.

During his fight, you have three options: 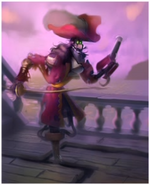 The stained glass windows in the Dark Beauty Castle that reveal the real Captain Hook, Scar and Maleficent (click image for better view)

Hook in the Thinner ending.

Hook in the Paint ending.
Add a photo to this gallery

Retrieved from "https://disney.fandom.com/wiki/Animatronic_Captain_Hook?oldid=3821178"
Community content is available under CC-BY-SA unless otherwise noted.